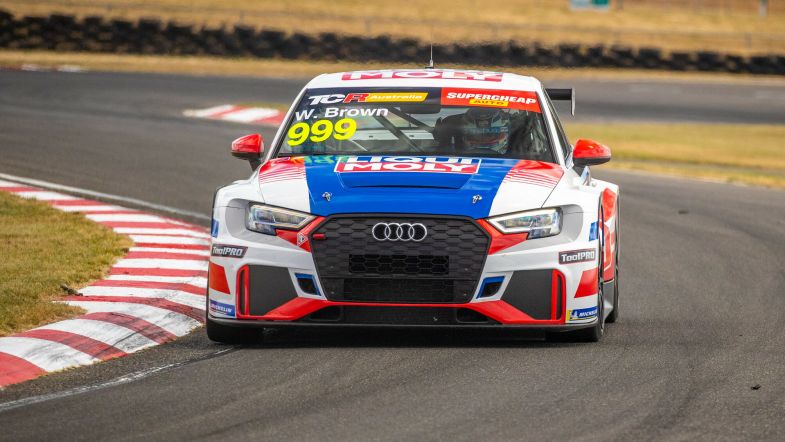 Melbourne Performance Centre’s Will Brown became the 11th different TCR Australia winner this season after a superb comeback drive in the final race of the weekend at Sandown.

The 2019 series champion started from pole but got a poor start and dropped to fourth initially. But a strong recovery drive helped him pass long-time leader Jordan Cox (GRM Peugeot) in the second half of the race to claim the win.

Michael Caruso produced a sterling drive from seventh on the grid to take second, finishing just over a second adrift at the flag.

Post-race, Brown said: “It’s taken me a while, but that was an awesome race. I got a terrible start but picked my way through the field and Jordan made a small mistake so that gave me the chance.”

True to form across the weekend, the polesitting car of Will Brown got off the line slowly as Cox led the way from the Honda Civic Type-R of Zac Soutar into the first corner.

Brown dropped to fourth, as race two winner Bargwanna also got by while points leader Tony D’Alberto  was fifth.

Before long, Brown started to make his way back up the field, first by breezing past Bargwanna along the main straight for third at turn one, and then barging past Soutar at turn eight.

Soutar then got bullied down to fourth by Bargwanna before falling into the clutches of Josh Buchan’s HMO Customer Racing Hyundai and the Alfa Romeo of Michael Caruso, both of whom got ahead of D’Alberto.

Brown then caught up to the back of Cox after the Peugeot driver nearly lost the rear of his car at turn eight on the seventh lap of 22. The gap was reduced to nothing but Cox managed to hold the Audi at bay.

Eventually, Brown made his move at turn eight for the lead and the pair made slight contact on the apex of the corner. Cox then tried to fight back on the run to the final corner, but the Audi held the upperhand to consolidate his advantage.

Further back, Bailey Sweeny and D’Alberto disputed sixth place at the first corner, with the Hyundai of Sweeny making contact with the Wall Racing Honda and shoving D’Alberto wide.

D’Alberto then turned Sweeny around before the pair made it to turn two, with Sweeny spinning down the order.

Meanwhile, Caruso was the fastest man on track and quickly closed down the leading duo of Brown and Cox entering the final laps. Such was the pace of the Alfa Romeo, that Caruso breezed past Cox at turn four to grab second and set off in pursuit of Brown.

Caruso closed the gap to Brown but the margin remained constant at just over a second as Brown came home to take his first victory of the season.

Cox finished a somewhat lonely third place, while Buchan got the better of Bargwanna in the closing laps to take fourth. Bargwanna dropped behind D’Alberto at turn five on the penultimate lap.

Outside of the top five, Bargwanna was sixth ahead of Sweeny, while James Moffat produced a superb drive from 15th following his incident in race two to finish eighth on the road.

Similarly, the GRM Peugeot of Dylan O’Keefe stormed through from 16th to end up ninth at the finish, while Jay Hanson did likewise to come home 10th after starting 18th.

In the standings, D’Alberto takes a 56-point margin over Cox into the final round of the season at Bathurst, with Brown third, some 73 points adrift.

Buchan and Soutar are tied for fourth in the points, 93 points shy of the lead, with Hanson sixth after a frustrating weekend in Melbourne.

The final round of the season takes place on the weekend of 11-13 November.