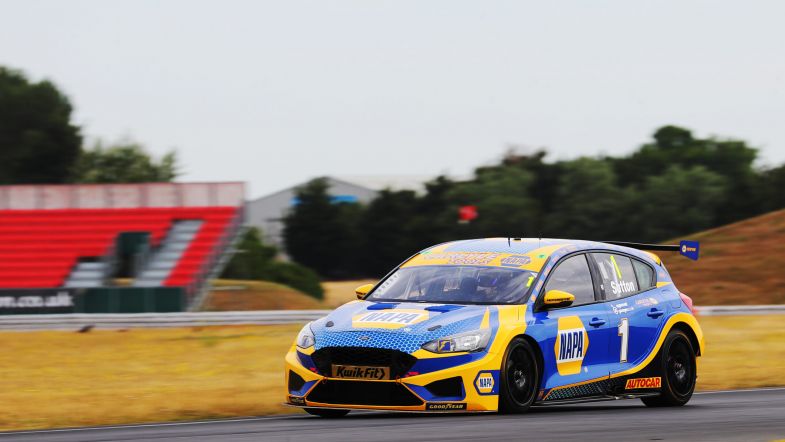 Ash Sutton insists that he is relishing the challenge of the final two rounds of the BTCC season as he bids to secure his fourth championship title.

Having been a consistent points scorer during the early stage of the season, Sutton has moved himself firmly into championship contention since the summer break having scored wins at Knockhill, Snetterton and Thruxton.

It means the Motorbase racer is only six points shy of Colin Turkington at the top of the points and well placed in his quest to become the first driver since Andy Rouse in the early 1980s to take three successive titles.

“I’m looking forward to Silverstone this weekend,” he said. “We’re getting down to the climax of the season now and I’m relishing what lies ahead.

“Three wins in as many events means we head into the weekend with some real momentum behind us, and despite Silverstone being a completely different challenge to Thruxton I’m confident we can be in the mix.

“The car is feeling awesome so let’s get after it and see what we can do.”

Sutton will be looking to once again count on the support of NAPA Racing UK team-mate Dan Cammish after he gave up a win in race two at Thruxton last time out, with the former Porsche racer optimistic of adding to the victory he had secured earlier on race day in Hampshire.

“I am feeling confident for Silverstone, we actually turned a corner at Snetterton but you just had to look a bit deeper,” he said. “Then we turned up at Thruxton, put it on pole, won race one and had the speed to win race two. Winning a BTCC race is a huge achievement, so to give the [race two] win away like we did at Thruxton shouldn’t be underestimated.

“As a team we’re fighting for three titles though, so it was the right thing for me to do. It’s all about the bigger picture for NAPA Racing UK and Motorbase, not just this year but going forward. I’m excited ahead of Silverstone and looking forward to it.”