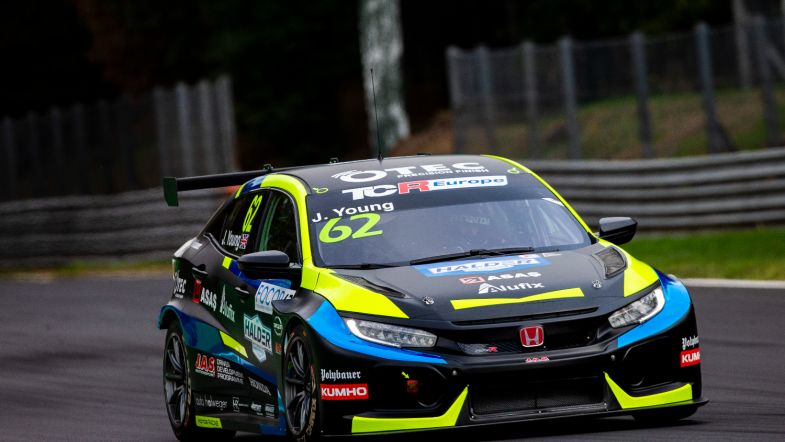 Jack Young continued to set the pace in TCR Europe practice, although the Halder Motorsport man had to fit a new engine for the second session of the day.

In first practice, Young had gone to the top of the times early on before what was later diagnosed as an engine problem in his Honda Civic Type R TCR brought his session to an early end.

Extensive work was done to try to figure out the issue and whether the engine could continue being used, but eventually it was decided on putting in a new unit to guarantee Young could get back on track later in the day.

He made the most of the new engine in second practice, doing a few installation laps before powering to the top of the times with a 1:56.075 lap. It was a benchmark that nobody would be able to even get near, and Young followed it up with a succession of 1:56 laps while the rest of the 25-car field lapped in 1:57 and 1:58 territory.

The one-second gap at the top was cut down to just over half a second with nine minutes of practice to go, as Target Competition’s Felice Jelmini went second fastest. He could not repeat that kind of pace though, and no other driver bar Young lapped sub-1:57 again until Comtoyou Racing’s Tom Coronel bettered Jelmini with three-and-a-half minutes remaining of the session.

He set a 1:56.537 in his Audi RS 3 LMS, and was able to set another lap that was just a tenth slower as the track got busier with drivers all improving on fresh tyres. The Hyundai Elantra N TCR-driving Jelmini and Coronel’s team-mates Franco Girolami and Marco Butti all managed to lap sub-1:57 in the final minutes, with Volcano Motorsport’s Klim Gavrilov best of the rest in fifth place in his Cupra León Competición and over a second off the pace.

Target Competition’s Josh Files, who is Girolami’s closest rival in the championship fight, was 10th fastest and 1.262s slower than Young.

Qualifying, which may occur in wet conditions based on local weather forecasts, takes place on Saturday at 09:30 local time (CEST).