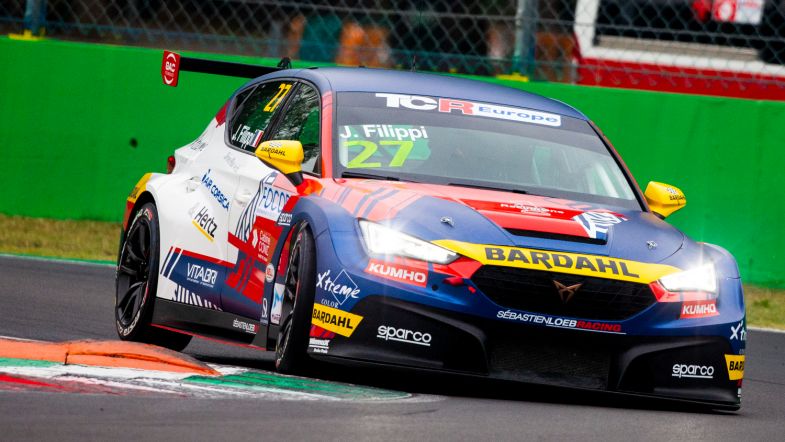 John Filippi says work he did with his Sébastien Loeb Racing team on their Cupra León Competición during TCR Europe’s Norisring round was critical to a dominant pole position at Monza.

For the first time since the 2020 season opener, Filippi was the fastest driver in qualifying and on a wet track surface at Monza he was 0.99 seconds faster than anyone else.

The Norisring round in early July was the last time TCR Europe drivers ran on a wet track, and the German street circuit proved surprisingly relevant for set-up direction in Italy.

“The work started from the Norisring, when we had wet conditions,” Filippi explained to TouringCarTimes.

“It was the first time for the team and me with this car on the wet, and we did a lot of mistakes at that moment. We learned a lot also, and we tried to put this [in mind] for the wet conditions today. It was a little bit dry in Q1, but starting to be more wet in Q2, and the idea was to find a compromise a little bit between the dry set-up and the wet set-up.

“I think we did a very good job on this, because in both Q1 and Q2 I was on the top. And yeah, experience also helped me a lot. The fact that I know this track quite well now.

“When you go in qualifying, it’s true that normally with former [used] tyres you have only one lap on the dry [before changing them]. Now with this [grooved] tyre, it’s more constant. So you are able to reach exactly the limit step-by-step. Taking the first lap maybe to warm more the front tyres, and after push on the second lap to have the perfect lap on the second lap.

“I know at the end it’s the same, you have only one shot, one window to do the lap, but I think it’s all this that made me arrive at this moment and made this result. And to be honest I’m only 30% of this, because the team did an amazing job, the car was perfect and even my best lap I think I was able to improve and it was not still perfect. Most of the result is the luck, and the set-up of the car.”

Filippi expects it to be a “completely different” challenge in Race 1, at at 13:40 local time (CEST) on Saturday, but says there is “no pressure” on him as he starts from pole.