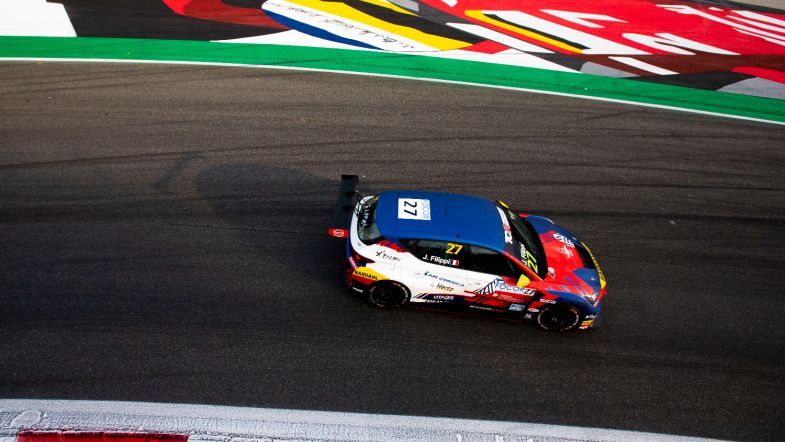 Sébastien Loeb Racing’s John Filippi claimed his first TCR Europe pole position in over two years at Monza by a margin of almost a second.

Although a wet track was declared for Q1 following early morning rain, the majority of the expanded 25-car field headed out straight away on slick tyres. The grip level was lower than on a full dry track however, meaning drivers could not match the pace from free practice.

Jack Young, fitted with a new engine in his Honda Civic Type R TCR after his previous unit broke in first practice, set the early pace before Marco Butti went to the top for the Comtoyou Racing-supported Élite Motorsport team in his Audi RS 3 LMS.

That put him 0.648s clear of Comtoyou’s points leader Franco Girolami, and once everyone was on track there was enough traffic to prevent anyone from improving for some time.

Butti improved his best laptime to prolong his time at the top, with the Cupra León Competición-driving Filippi also breaking into sub-2:01 territory as the track continued to dry.

Many drivers pitted for a fresh set of slick tyres for their final run of Q1, although some also had their windscreen wipers moving, and with a two-and-a-half minutes to go a stonking 1:59.834 lap from Volcano Motorsport’s Klim Gavrilov put him in first place by a substantial margin.

Janík Motorsport’s Jáchym Galáš jumped up to second place, although he was still more than two thirds of a second off Gavrilov’s pace, and Butti shuffled Filippi down to fourth before yellow flags were waved at the first corner and then the session was red flagged with just under two minutes to go as Halder Motorsport’s Young struck session-ending trouble for the second time in two days.

That meant there would be no time for a restart, meaning the 12 drivers progressing to Q2 was settled as was the starting order behind for the weekend’s races. Of those not making it through were Mike Halder in 15th, Felice Jelmini in 16th, Young in 17th (although he will start from the back for race one due to his engine change) and the title-fighting Tom Coronel in 18th.

The track was considered dry for Q2, and TCR Italy regular Michele Imberti went straight to the top but with a lap several seconds slower than was set in Q1 as rain was actually starting to reach the circuit again.

Filippi put himself on provisional pole with his second flying lap, a 2:03.731 putting him 0.990s clear of Target Competition’ Nicola Baldan and 1.050s up on Galáš in third place. Yellow flags were then waved at turn two as Felipe Fernández struck trouble at turn two, meaning it was not until the lap after for many drivers were they able to improve.

However none did, and Filippi took pole ahead of Baldan, Galáš, Michelle Halder and Butti.

Imberti had a lap deleted for track limits violations and qualified sixth, with Girolami 1.811s off the pace in seventh. His closest title rival, Target Competition’s Josh Files, did not improve after his first lap on track and it left him at the bottom of the Q2 order in 12th place, 3.641s slower than Filippi.

With the top ten of Q2 reversed to set the front of the grid for race two, it means Gavrilov will start on pole on Sunday, with Girolami lining up fourth and Files starting 12th.