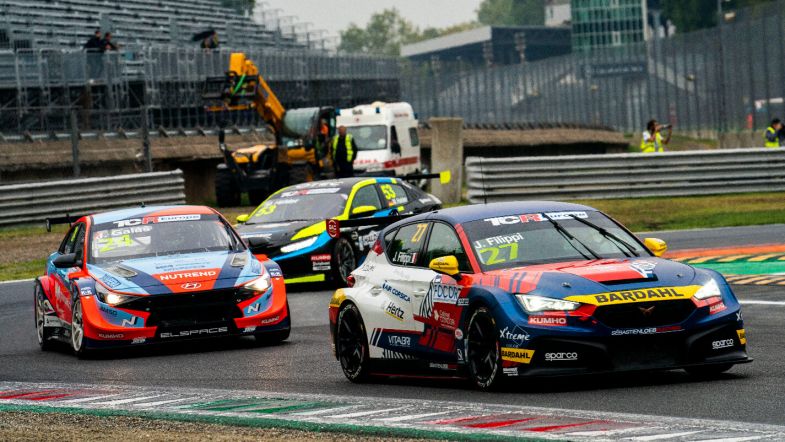 Sébastien Loeb Racing’s John Filippi won from pole in TCR Europe Race 1 at Monza, but had to fight back after losing his lead early on.

On a soaking wet track, Filippi avoided wheelspin at the start but had fellow front-row man Nicola Baldan make an equally strong launch. Baldan’s grid slot was on the inside line, and so he was able to brake later to try to take the lead.

Filippi made a switchback move through Curva Grande to nose back ahead, but Baldan once again had the inside line for the second chicane and got ahead.

Target Competition driver Baldan held the lead for the first six laps, with just over two of those spent behind the safety car after Michelle Halder’s Honda Civic Type R TCR got beached in the gravel at the last corner and had to be removed.

Although Baldan then leapt away at the restart, and Filippi cut the second chicane, the positions at the front swapped around and Filippi then settled into the lead while Baldan fell into the clutches of Janík Motorsport’s Jáchym Galáš.

The race was extended from 10 to 12 laps due to the safety car intervention, and that provided Galáš with the time needed to figure out where he was quicker than Baldan, with both in Hyundai Elantra Ns.

He got his move done at the end of lap nine after sitting in Baldan’s tow, then a charging Mike Halder passed Baldan too on the penultimate lap to rise into third place after starting his Honda from 14th on the grid.

As Baldan came under further late pressure from team-mate Josh Files, Filippi claimed his first win of the season by 0.637 seconds ahead of Galáš.

Title contender Files had a messy race with frequent off-track moments while he battled for positions, but he made important early progress from his 12th place on the grid to be fifth by the end of lap one.

Ultimately he could climb no further than that, while points leader Franco Girolami and his Comtoyou Racing team-mate Tom Coronel had disappointing runs to 12th and 13th from seventh and 17th on the grid respectively.

Just ahead of them was Jack Young, who started at the very back due to an engine change, charged up to 12th in a single lap, got knocked back down the order by contact with Girolami and eventually recovered to 11th place.

Files has now cut Girolami’s points lead to 62 points with three races of the season to go, while Coronel has dropped to fourth in the standings but just about remains in title contention, 95 points behind.

Eighth place for Volcano Motorsport’s Isidro Callejas in the race has lifted him to third place in the championship battle.

The second race of the weekend starts at 12:25 CEST on Sunday.