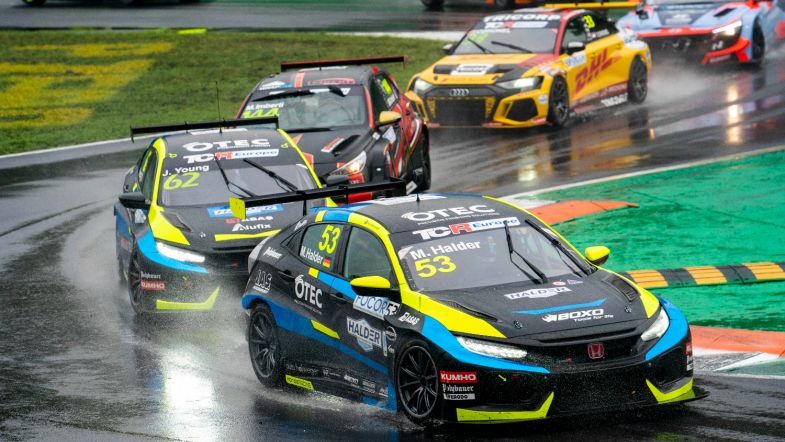 Halder Motorsport did finish Saturday at Monza with one car on the TCR Europe podium, but the pace suggested all three of its Hondas could have potentially got to the front.

Michelle Halder qualified fourth, with team-mates Mike Halder and Jack Young starting 14th and 25th on the grid for Race 1.

Young climbed 12 places on the opening lap of what was a very wet race, and Mike Halder rose up eight places from his starting spot. His sister Michelle meanwhile had a slow launch and slumped to 11th. Her race then ended on lap three as her Civic Type R TCR got beached in the gravel at the last corner.

By that point Young had made it into ninth, but following the safety car period required for the stationary Halder car to be moved he fell down to 20th as he spun at turn one following contact with Comtoyou Racing’s Franco Girolami.

In the second half of the race he charged back up to 11th place, taking fastest lap by 1.638 seconds, while Halder steadily made his way up to third place for his third podium finish of the season.

“I just think me and Mike are really good in the wet,” Young said to TouringCarTimes when asked about the pace advantage the Honda seemed to have in wet conditions.

“He experiences it in TCR Denmark, and at home I basically live in the rain. We both made very good starts, and I think after two laps I was P9 and Mike was P6, very good. But contact again, so that ruined my race.

“I think for sure me and Mike could have both been on the podium today if that [contact didn’t happen].”

Halder added that the wet conditions were reducing Honda’s straight-line speed deficit to some other manufacturers, saying his team was “lucky” to be racing in the wet, while Young said the pair of them were “just taking advantage of everyone else’s weaknesses” as they made overtake after overtake, and that “the secret’s a steady right foot and a good bum, for the feeling”.

As their cars went from high to low fuel through the race, they became progressively harder to drive in the wet.

“It was hard because everyone’s tyres were heating up, so more and more everyone was struggling with understeer,” Young explained, with Halder in agreement and adding “we are lucky that we have some experience with Kumho [grooved] tyres”.

Had Michelle Halder been able to complete the race, would she have been a podium contender too?

“I also think so,” her brother agreed. “Though she had not the good start, she was also on the move to overtake Pepe Oriola back, so the speed was also in Michelle’s car.”

Following up from that point, Young added: “I think it says a lot when she’s trying to overtake Pepe. I just got the ideal laps in and Pepe is the second fastest man on track. I think that says a lot in itself, Michelle challenging drivers at the top. I love to see the team so far up, and well done to Mike today, and hopefully we can all get up there tomorrow.”

Michelle Halder won a TCR Europe race at Zolder in 2020, but has finished no higher than 13th this season.