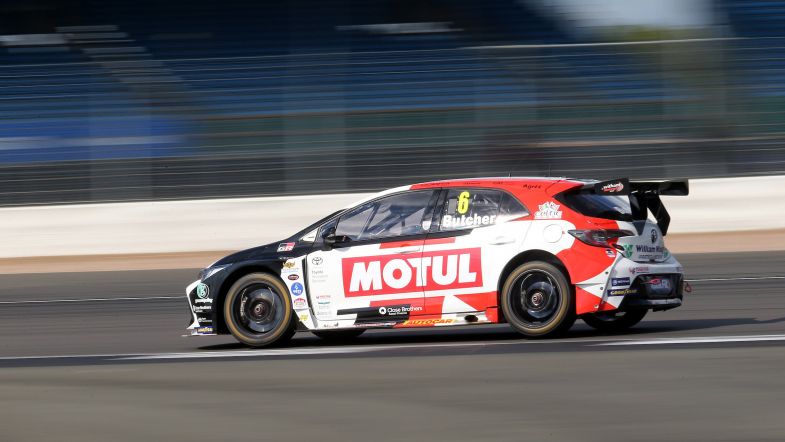 Rory Butcher secured his second successive Silverstone pole after topping the times in qualifying for the penultimate weekend of the BTCC season.

In a closely-fought 30 minutes of action, the Toyota driver was able to edge out Jake Hill’s BMW to secure his spot at the head of the field and set him up to fight for a potential first win of the campaign on Sunday.

Butcher would spend much of the session at the top, hitting the front before a brief stoppage at the mid-way point to allow the BMW of George Gamble to be recovered from the side of the Wellington Straight.

After the restart, he would prove to be unchallenged at the front although Hill would bring the gap between the pair down to end up just 0.037s behind on the times in second place.

As had been the case in practice, the top three would be covered by less than a tenth of a second as Adam Morgan continued his fine form with the third best time ahead of Tom Ingram – who set the early pace in his Hyundai before being shuffled back down the order.

Dan Cammish would spend a large chunk of the session giving a tow to team-mate Ash Sutton but would end up as the quicker of the two NAPA Racing Fords in fifth spot with Ricky Collard, Sutton and Gordon Shedden behind.

Dan Lloyd took ninth, with Colin Turkington rounding out the top ten; the points leader working with Hill and Stephen Jelley to try and benefit from the tow in order to deal with the fact that he was running without any additional hybrid.

Title outside Josh Cook – who can wrap up the Independents’ title this weekend – was twelfth quickest.