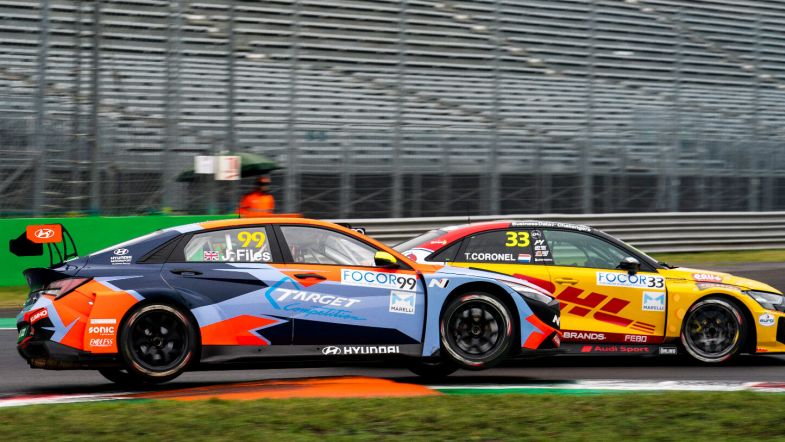 Although 13 drivers remain in contention to become TCR Europe champion, two of the main contenders will have a difficult time prolonging their title prospects at Monza after qualifying badly.

Target Competition’s Josh Files and Comtoyou Racing’s Tom Coronel currently sit second and third in the standings behind Franco Girolami, who like Coronel is in a Comtoyou-run Audi RS 3 LMS II, but came 12th and 18th in qualifying on Saturday morning.

Files progressed to Q2 by going sixth fastest in Q1, while Coronel was 2.123 seconds off the pace set by Volcano Motorsport’s Klim Gavrilov. However he believes he would have easily made it through to the next segment of qualifying were it not for some misfortune.

“I had two laps where I had traffic, then I pitted in, and here I just show you my times,” Coronel said to TouringCarTimes as he brought up a file on his phone showing each of his laps from Q1.

Coronel’s 2:00.713 that wasn’t able to stand would in fact have put him in fifth place, ahead of Girolami. Instead of getting the chance to out-qualify his team-mate and title rival, who sits 93 points ahead, Coronel will instead start ten places behind him for Race 1 on Saturday and 13 places lower on the grid of Race 2 on Sunday.

Files, who is 79 points behind Girolami in the standings, was frustrated to find his Hyundai Elantra N was less competitive in Q2 than it had been in Q1.

“As [team-mate] Nicola Baldan showed, the car was quick in these wet conditions,” he said. “Q1 went well, but when it got to Q2 I don’t know where my grip went. Everyone else seemed to have it, but I lost it.”

The top 10 from Q2 get reversed to set the Race 2 grid, and it means Files will start 12th for both races and also be eight places behind Girolami for Race 2.

Halder Motorsport’s Jack Young, the most distant of the title contenders, followed up a dramatic Friday in which he had to change an engine with a qualifying session that resulted in a broken car and a penalty.

Young actually went fastest early in Q1, but had a clash with Volcano’s Evgeni Leonov at turn three that resulted in his steering arm breaking on the front-right and leaving him stranded on track with three wheels on his Honda Civic Type R.

He admitted fault for the incident, and was handed a three-place grid penalty for Race 2, having already been to the back of the Race 1 grid due to an engine change.