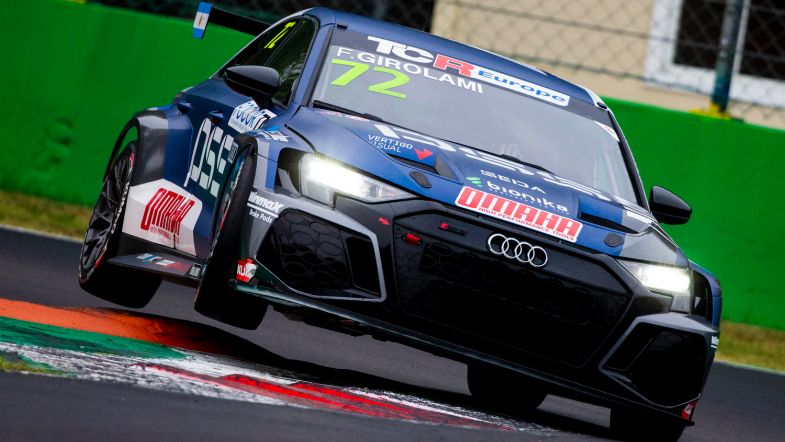 Franco Girolami has strengthened his position at the top of the TCR Europe points table by winning the reversed-grid race at Monza.

The Comtoyou Racing driver now has a lead of 89 points over Target Competition’s Josh Files, who rose from 12th to nine in the Sunday race, and there are only 96 available to score in next month’s season finale.

Girolami started fourth on the grid, with Volcano Motorsport’s Klim Gavrilov on pole.

Girolami had already got into second place exiting the first corner, even though front row man Sergio López had been attacking Gavrilov on the way in, and was in the lead by the end of the lap as a stronger run through Parabolica enabled Girolami to tuck in on Gavrilov’s inside at the exit and run alongside him down the pit straight.

It was no easy job for Girolami after that, with Gavrilov and Target’s Nicola Baldan, who had got his Hyundai Elantra N TCR past López for third before the della Roggia chicane on the first lap, chasing him throughout.

Girolami’s title ambitions did look like they were getting easier though, as Volcano’s Isidro Callejas retired at the first chicane on lap two and Comtoyou team-mate Tom Coronel made slow progress from 17th on the grid. That realistically left Files as his only title rival, and the Briton had already climbed into ninth before the safety car was called out due to Calleja’s stationary car.

The race was extended from 10 to 12 laps due to the safety car intervention, with racing resuming on lap five and there being immediate drama as Race 1 winner John Filippi made contact in a multi-car fight for position at the first braking zone and his rear-left tyre started rubbing against the bodywork of his Cupra León Competición and leading to it frequently smoking and also slowing him down significantly in a straight line.

He began to lose places, having previously been running in seventh place, before retiring by stopping his car at the side of the track on lap eighth. Target’s Felice Jelmini also ended his race that lap by heading into the pits, while Michelle Halder – who had been just behind them – went own an escape road after being passed by Marco Butti and then plummeted to 19th place.

At this point there was still a lot of pressure being applied on Girolami by Gavrilov, and the three-way fight for the win reduced to two as Baldan was handed a time penalty for track limits abuse. With the gap he had to López he was on course to finish fourth, a drop which was then guaranteed as the race was red-flagged on the penultimate lap after MM Motorsport’s TCR Italy regular Paolo Rocca ran wide exiting the Ascari chicane and smashed into the barriers at high speed.

That meant the results were taken from the end of lap 10, when Girolami had been just 0.326 seconds ahead of Gavrilov. Baldan’s penalty meant he was classified 6.124s behind the winner, with RC2 Junior Team’s López finishing 3.972s behind in third.

Although Rocca had a tricky weekend, fellow debutant Michele Imberti of the CRM Motorsport team had a far better run and finished fifth, a result that actually puts them ahead of Halder in the championship standings.

López’s team-mate Felipe Férnandez finished sixth, and appeared to escape punishment for contact with Filippi, and Halder Motorsport’s Jack Young charged from the back to come seventh with fastest lap by over a third of a second.

He went from 20th to 15th in the first two laps, then following the early safety car period jumped into the top ten. He made further progress, including a double move at the Lesmos, despite an off exiting Ascari.

The second half of Coronel’s race was far stronger than the first and he finished eighth, but is now out of title contention, while Files and Pepe Oriola completed the race top ten.

The last race weekend of the season takes place at Barcelona on October 14-15.