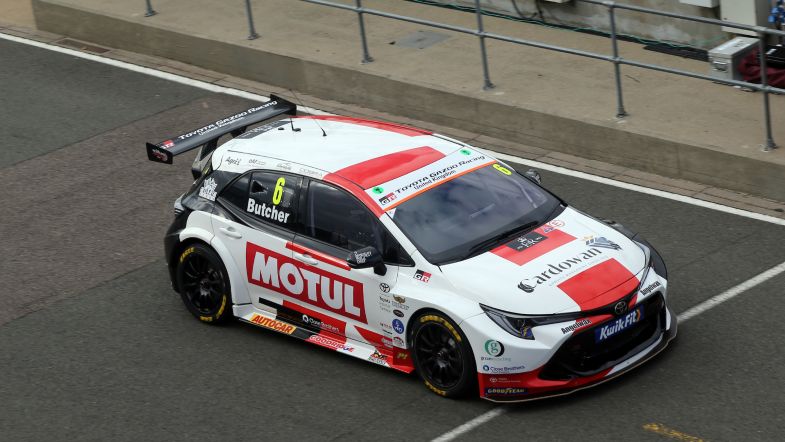 Rory Butcher secured victory in the opening BTCC race of the weekend at Silverstone as a rare no score for Colin Turkington saw the title battle take a twist.

Butcher qualified on pole in his Speedworks Toyota and was able to take a handy lead in the early stages as the pack behind squabbled for position before seeing his advantage eradicated when Ash Hand spun off at Becketts in his Vauxhall Astra – which had earlier been pushed off the grid at the start of the green flag lap.

Following the restart, Butcher found himself under pressure from the BMW of Jake Hill, which had run in second for much of the race bar a brief moment in the early stages when Tom Ingram edged ahead in his Hyundai exiting Woodcote.

Hill would remain fixed to the tail of the Toyota as the laps ticked down but couldn’t make a bid for the lead, allowing Butcher to score his first win of the campaign.

The lead pair would be joined on the podium by Adam Morgan, who lost a spot to Ingram on the opening lap but then regained the place at the start of lap three when he got up the inside of the Hyundai at Copse – with Ingram running off line and slipping back down the order.

Morgan would take a look at Hill on more than one occasion but had to settle for third spot ahead of the Honda of Gordon Shedden; the Scot working his way forwards from eighth on the grid to finish just off the podium.

Having dropped back to sixth after the moment at Copse, Ingram recovered to finish fifth and also scored the bonus point for fastest lap, with the top six completed by Ash Sutton.

Sutton had dropped two spots at the start before battling ahead of Dan Lloyd and Ricky Collard into seventh, and ran behind Dan Cammish throughout before his team-mate eased over on the Wellington Straight on the final lap to allow the defending champion through to score an extra point.

It means Sutton now leads the standings as a result, with only ten points covering the lead driver.

The BMW driver was running tenth before a moment at Luffield saw him spin off after contact from Josh Cook’s BTC Racing Honda, with Turkington forced to pit later on following a clash with Jack Butel’s Hyundai as he tried to come through the field.

The Northern Irishman would end up unclassified in the results, nine laps down on the leader.