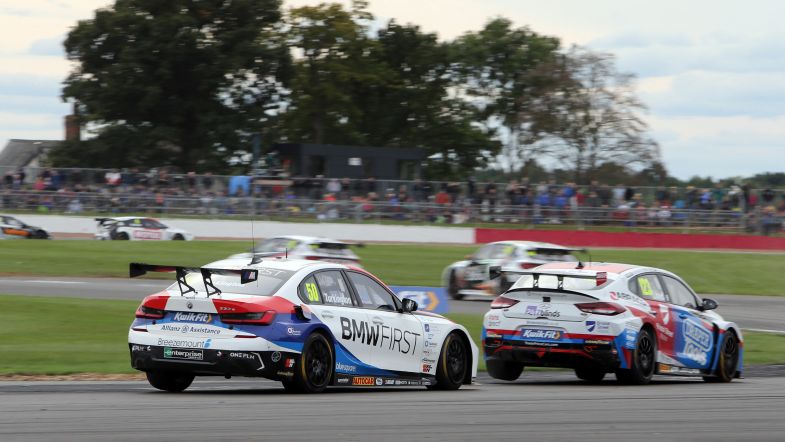 Colin Turkington insists that he isn’t giving up hope of a record-breaking fifth BTCC title despite seeing his championship hopes take a major hit at Silverstone.

The West Surrey Racing driver had led the standings going into the race weekend but had to settle for tenth on the grid for race one having been hampered by the fact he was running without any additional hybrid power.

Things would go wrong for the Northern Irishman however when contact from Josh Cook tipped him into a spin, and a further clash with Jack Butel would then result in him being forced to pit for repairs to his BMW.

From the back of the grid, Turkington would battle to 13th place in race two and twelfth in race three despite hybrid issues to salvage some points but has now dropped to fourth in the standings – 27 points down on new leader Ash Sutton.

“It’s difficult to put Silverstone into words, we just couldn’t get a break!” he said. “The contact at the start of race one put me on the back foot, but then I had problem after problem which left me in a gun fight with a knife!

“When you’re missing that extra power at a track like Silverstone, there’s just nothing you can do. It’s impossible to make the kind of progress I needed to in races two and three, which I’m certain we could have done if my car had been trouble free.  ”It’s extremely frustrating for me and the team because there was nothing more we could have done. They gave me everything and we left with very little.”

Turkington added that he would keep pushing going into the Brands Hatch finale having been in contention enough times to know that anything could still happen in the final three races.

“I think we are still feeling numb at this stage but we’ll lick our wounds, dust ourselves down and prepare for the finale,” he said. “As we’ve just experienced, the impossible can happen and I’ll be going there with firm belief I have a chance.

“The team and I have worked too hard to give up on our chances and it’s by no means over.”