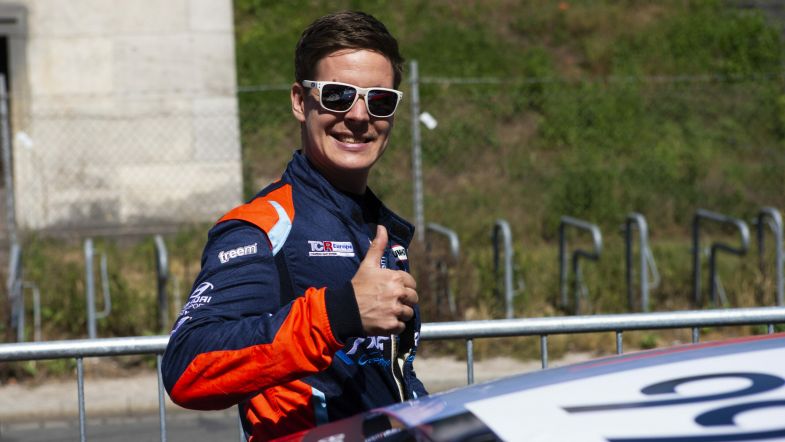 Josh Files “there to win” at Barcelona, but says title is “not really” possible

Josh Files will require a near-perfect weekend at Barcelona to claim his second TCR Europe title, and the Target Competition driver is expecting to be winning at the season finale.

However Files’ confidence about his competitivity in the 14-16 October title decider is not matched by his belief in his title chances.

There are 96 points available to score at Barcelona and Files is behind Comtoyou Racing’s Franco Girolami by 89 points. To overcome him, he will need to win one race and finish first or second in the other, as well as collecting a big haul of bonus points from qualifying.

“Well not really,” Files said when TouringCarTimes put to him that he still had a chance of becoming champion. “I think he’s done enough.

“But we’re just there to win, we’re there to win races and I think our car in Barcelona will be really good because there’s not any straights. Or not as many [as other tracks]. There’s just the one [very long straight]. The rest of the track is corners and chassis, and that’s where we’re good.”

It is difficult for a driver to achieve what Files needs to get done at Barcelona, although last year Mikel Azcona did get double wins at Spa-Francorchamps (where he was also a repeat winner in 2020) and the Nürburgring, as well as starting off his title-winning 2021 season with a first and a second at Slovakia Ring.

Files and Julien Briché each had a weekend where they got a first and a second place during their 2019 title fight, and the year before that Jean-Karl Vernay and Dušan Borković both had weekends where they were double victors.

While only Files can beat Girolami to the title, the race to be runner-up is being contested by eight drivers and Files only has 16-point margin over Volcano Motorsport’s Klim Gavrilov in third place.