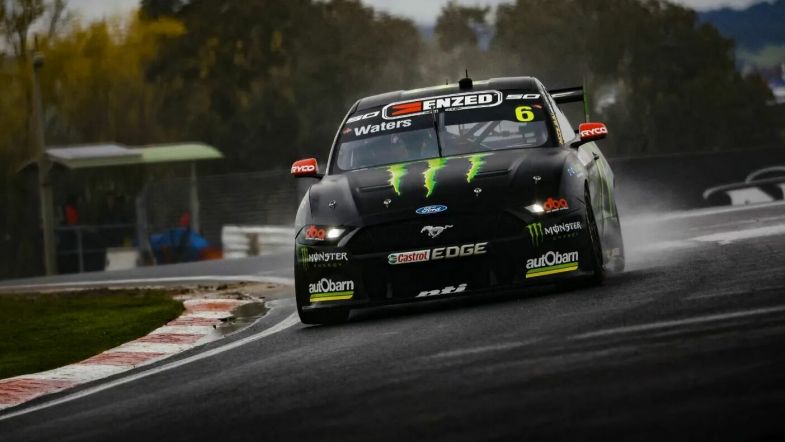 Tickford Racing’s Cam Waters and James Moffat will start from pole position for the Bathurst 1000 after heavy rainfall forced the cancellation of the Top 10 Shootout at Mount Panorama.

Inclement weather hit the circuit throughout Saturday’s action, with the support races in the Porsche Carrera Cup and Super2 both called off.

It is the first time in the history of the Great Race that the Shootout has been cancelled.

Large puddles of standing water across the 6.213km circuit and a less favourable forecast for the remainder of the day meant that race officials were left with no other choice other than to cancel the Top 10 Shootout.

A Motorsport Australia statement said: “Race Control has advised that the Supercars Top 10 Shootout has been cancelled due to extreme weather, leaving the track in an unsafe condition for competition.

Shane Howard, Supercars CEO explained to Foxtel that he was ‘extraordinarily disappointed’ but that the officials ‘couldn’t compromise on driver safety’.

“Obviously we had that big downpour of rain which had a lot in it and it had a lot of run-off coming onto the track.

The officials now gave it every chance to see if it would improve; they actually tried to divert where the main water course was coming onto the track but unfortunately there was just too much there and it wasn’t dissipating and it was just sheeting across the circuit.

“So, the officials deemed it unsafe to compete and we can’t compromise driver safety. It’s extraordinarily disappointing for all the fans and all of the drivers, but we had to make a decision.”

Speaking to Foxtel after the announcement, polesitter Waters explained how he had mixed emotions.

“I’m disappointed because I really love the Shootout, you get the chance to have the track to yourself,” waters said. “But the rain was really crazy and you saw the rivers and everything going on, it was going to be a dangerous thing.

“[It’s] awesome to start on pole for tomorrow, though.

“I was ready to go out, put my suit on and listening to music, and then I saw the lap the guys did and I thought we were going to get going. But as soon as you hit a river, you have no control and you don’t want cars off a day before the race.

“Yesterday, when you had a moment, once you got past the rivers, the track was actually in pretty good condition, but today it’s just drenched.”

Waters will therefore line up on pole in an all-Ford front-row, with Penrite Racing’s Lee Holdsworth ad Matt Payne second on the grid.

Next up is the Shell V-Power Racing Team Mustang of Will Davison and Alex Davison, with the Holden of Nick Percat and Warren Luff in sixth.

Following his three-place grid penalty from Friday’s first qualifying session for contact with Macauley Jones, Shane van Gisbergen and Tander will start seventh, with the Tickford Ford of Courtney and Zane Goddard alongside.

The top 10 is rounded out by a pair of Boost Mobile Racing powered by Erebus cars of Brodie Kostecki and David Russell in ninth, ahead of WIll Brown and Jack Perkins.