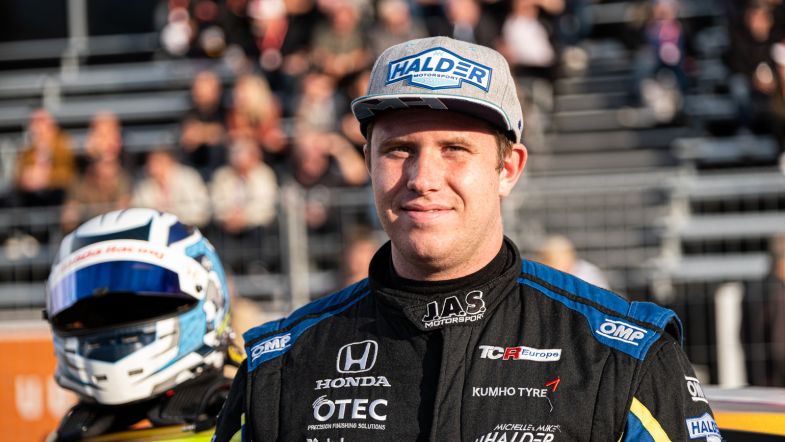 Jensen leads Sylvest at the top of the championship by 23 points, with Halder one point further behind. There are 81 points available to score across this weekend’s three races.

It was GMB Motorsport driver Jensen who was first to the top in the first segment of qualifying, but then it was teammate Gustav Birch who became the driver to beat in his Honda Civic Type R TCR.

He laid down a 1:14.615 lap that put him comfortably clear of anyone else, with TPR Motorsport driver Halder late to set a lap but immediately jumping into second place when he did so with a 1:15.187. With his second lap he closed in to just 0.041 seconds of Birch.

As the track got grippier the pace improved, and Birch was briefly demoted to fourth by Jensen, Sylvest and Team Auto Lounge Racing’s debuting Kevin Engman.

However he quickly returned to first place by lapping sub-1:12, and found more pace to comfortably end the session on top. Jensen moved into second place late on, demoting Engman and Sylvest, while Halder did not improve on his early laps and ended up down in 10th place, but still enough to progress to Q2.

This time Halder was on track as early as possible and put in a 1:11.119 as a benchmark to beat. Birch and Engman initially got closest, then Halder went almost a second faster with a 1:10.144.

Jensen was also finding big gains and he went second fastest, albeit three quarters of a second slower than his title rival. But in the closing minutes he was able to go even faster, while Halder once again didn’t improve on his early laps.

A late 1:10:388 lap brought Jensen closer to Halder, and he had time for one lap after that. It was another personal best, but not enough to topple Halder, whose third pole position of the season was earned by 0.164s.

The first race of the weekend is scheduled for 12:05 CEST on Sunday.