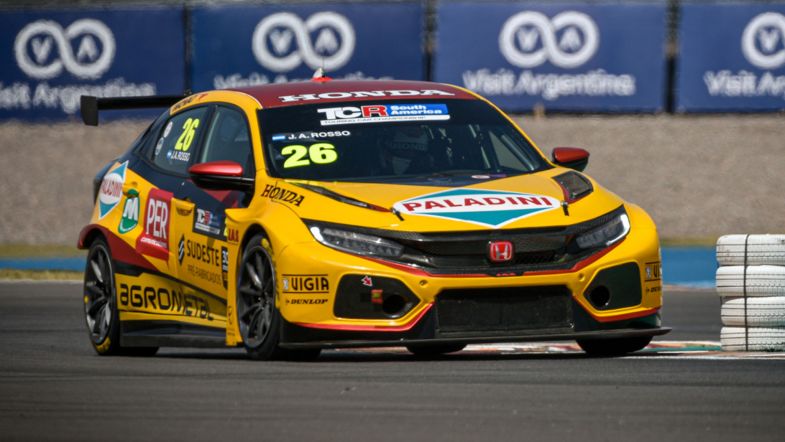 Honda driver Juan Angel Rosso claimed a hard fought victory in in the second San Juan Villicum race, host of the final round of the 2022 TCR South Argentina season, with the race having two safety car interventions due to multiple incidents.

At the rolling start, Marcio Basso (Lynk & Co 03 TCR) got into the lead but went deep at Turn 1, with Figgo Bessone, driving a Peugeot 308TCR, taking the lead.

The action got heated in the middle pack, with Hyundai driver Javier Scuncio climbing up to third place, followed by Llaver and newly crowned champion Fabricio Pezzini (Lynk & Co 03 TCR).

Franco Farina was bumped out of the track by Frederick Balbi, with the safety car coming into action.

The race was restarted on lap five, with Basso attacking Bessone for the lead, but instead coming under fire from Scuncio, who overtook the Lynk & Co driver, followed by Llaver.

Bessone continued leading on lap six but with Llaver right under his rear bumper, as Pezzini closed the gap to both. The battle for the top three favoured Scuncio making contact with the leading pack.

Llaver took the lead at Turn 1 on lap seven. Further back, Matías Milla (Alfa Romeo Giulietta TCR) was also on the move, recovering positions to climb up to eighth place.

At the front, Bessone tried everything to keep Pezzini behind, with the champion finally overtaking for second place.

Bessone got into trouble under braking at Turn 1 on lap nine, spinning out of control and collected Pezzini and Cupra driver Raphael Reis. The Brazilian driver was able to continue, but both Bessone and Pezzini had to retire on the spot, with the safety car coming into action for the second time.

The race was restarted again on lap eleven, with Barrio attacking Llaver from the green flag, but the Cupra driver managed stayed ahead while Milla lost fourth position to Reis.

The three entered the last lap separated by less than eight-tenths and when the chequered flag was brought out a lap later, Rosso crossed the line first ahead of Barrio and Llaver.

“It was a great race, I started from the last place and it was incredible,” said Rosso after the race. “I saw the opportunity of fighting for the lead and made the most of it.”