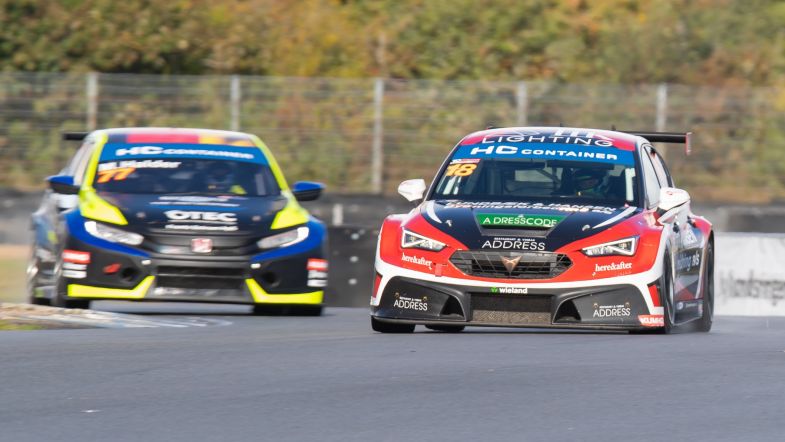 The TCR Denmark title battle turned into a two-way fight following the penultimate race of the season, won by Michael Markussen.

It was Bergström who made the best start, rocketing into the lead by darting past two cars off the line and then squeezing himself into a tiny gap on the inside to pass Markussen before the first corner.

Philip Lindberg, from fifth on the grid, was also able to get by Markussen on the inside at the exit of the corner. However Markussen could carry more momentum on the outside and had his nose back ahead by the next turn.

Racing was then neutralised as Christian Skaar’s car stopped sideways on track, and the action resumed on lap four. Bergström made a strong restart but then left the door open into the first corner, and Markussen went straight past to reclaim the lead.

Just behind the lead group, Race 1 winner Mike Halder battled past Engman to move into fifth place from 10th on the grid and with title rivals Nicolai Sylvest and Kasper Jensen, who had started ahead, already behind him.

They each gained a place when Bergström had to use the ‘penalty lane’, a separate route through the last corner that includes bollards, for jumping the start, and then at the start of the next lap Halder dived down the inside of Jacob Mathiassen at the first corner to take third place. Markussen was penalised for the same offense as Bergström.

Halder’s progress continued, moving into second place when a failed move by Lindberg on Markussen dropped him from second to fourth behind Halder and Jensen.

While stronger pace in the middle sector meant Halder could get right up behind the leader, he appeared to then lose ground on the straights each time and so the rest of the race was spent staring at the rear of the leading Cupra while also keeping Jensen at bay in his mirrors.

By finishing third, and scoring two extra points for fastest lap, championship leader Jensen only had his gap to Halder reduced by a single point, and means they go into the title-deciding Race 3 (at 15:25 CEST) split by 17 points.

Sylvest failed to climb up the order and finished seventh, behind Engman, Bergström and Mathiassen, meaning he has now dropped out of title contention.