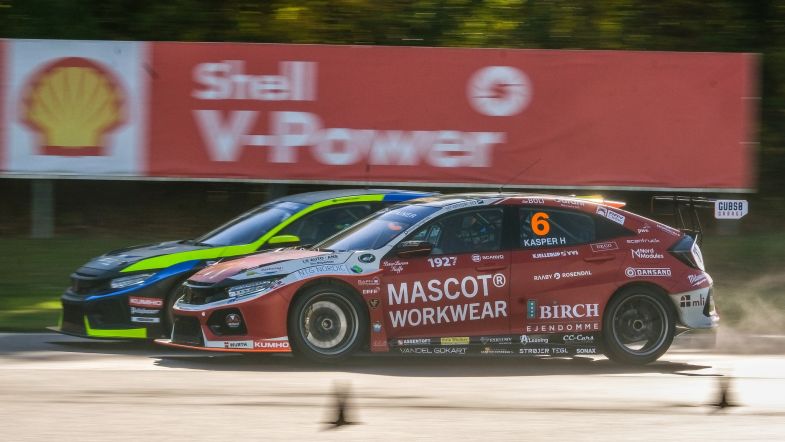 Mike Halder kept Kasper Jensen at bay to win the final TCR Denmark race at Jyllandsringen, but it was Jensen who became champion.

The pair went into the title-deciding race split by 17 points, with Jensen ahead. Halder had the pole position for the finale, with Jensen alongside him on the front row and Race 2 winner Michael Markussen and former title rival Nicolai Sylvest occupying row two.

Although the pole position grid slot was on the inside, Halder chose to move to the outside on the approach to the first corner to defend his lead. Markussen also had to get defensive to keep Sylvest at bay, but was then quickly gapped by the top two.

Jensen’s second and last chance to pass Halder came halfway through the race when Halder found his car a handful between the first and second corners, two left-handers that come straight after each other. Jensen managed to get alongside exiting the complex, and stayed wheel-to-wheel with Halder through the next corner.

Although he had the inside line for the corner after that, Jensen decided to go early on the brakes and tuck back in behind Halder as they navigated what was a tight bend.

That would be his last opportunity to take away the lead, but it was of no consequence as Jensen sat in Halder’s mirrors for the rest of the race to be crowned TCR Denmark champion for the third time in three seasons. He is the series’ only champion since its creation in 2020.

Markussen finished 10.428 seconds behind in third, with Sylvest a further two seconds back in fourth.

Jacob Mathiassen was fifth, and Kenn Bach and Gustav Birch benefitted from a penalty given to Anton Bergström for pushing another driver to rise into sixth and seventh place. After taking his penalty, by driving through the separate ‘penalty lane’ area of the track on the inside of the last corner, Bergström spent the rest of his race in eighth place fending off René Povlsen and Philip Lindberg.