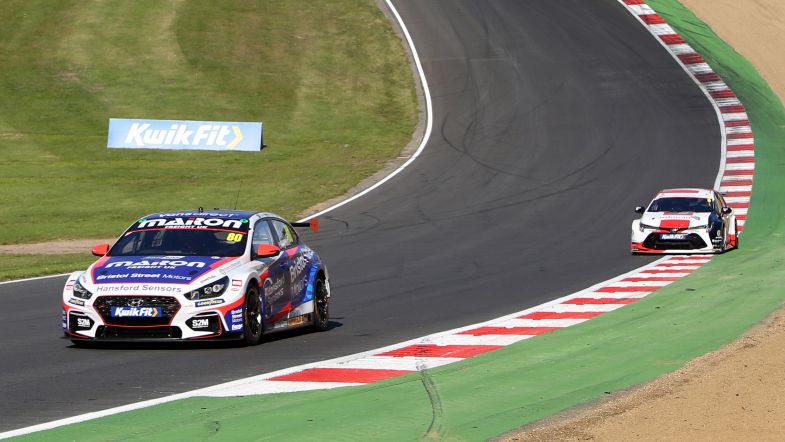 Tom Ingram made it two wins from two at Brands Hatch to ensure he will take an eleven point lead into the final race of the BTCC season.

As in race one, Ingram started from pole in his EXCELR8 Motorsport-run Hyundai and managed to hold off the challenge of Rory Butcher through the opening two corners to stay out front.

The lead duo managed to build a small advantage over Jake Hill as he worked to get heat into the tyres of his BMW and also keep the Ford Focus of Ash Sutton behind him.

Hill managed to edge away from the defending champion and closed in on Butcher before taking advantage of a small error from the Toyota man at Paddock Hill Bend to get through into second spot.

From there, he set about chasing down Ingram and the pair would be together for the final laps, with Ingram able to hold on to grab a vital win that extends his lead at the front.

Butcher looked set to take third spot to continue his strong end of season form, but found himself under pressure from Turkington, who had managed to find a way ahead of Sutton on the Surtees.

Turkington would manage to clear Butcher two laps from the end to secure third spot, but drops out of championship contention, with Butcher and Sutton following behind – the defending champion once again bearing the scars of contact from a BMW during the race.

Adam Morgan took sixth spot thanks to a time penalty for team-mate George Gamble for a false start, with Josh Cook, Dan Cammish, Bobby Thompson and Dan Lloyd following behind.

Lloyd will now start from pole in race three after Jason Plato drew ten in the reverse grid draw.