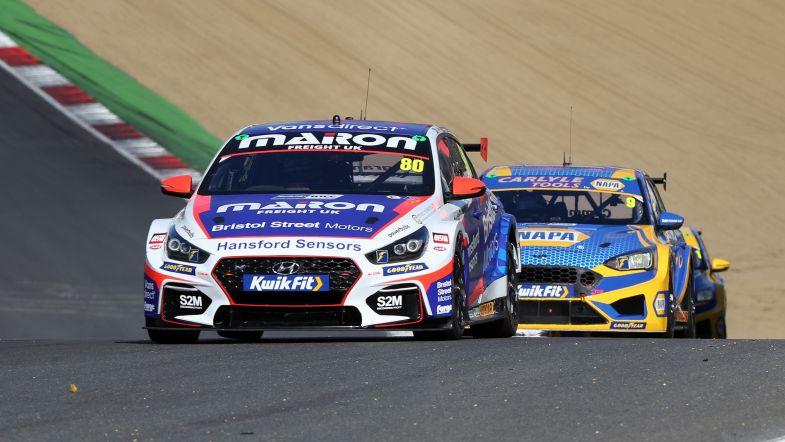 Tom Ingram secured victory in the opening race of the season finale at Brands Hatch to hit the front in the race to secure the 2022 BTCC title.

Ingram made the best start when the lights went out to retain the lead of the race, with Rory Butcher holding on to second and Ash Sutton maintaining third – despite a hit in the rear on the run to Paddock Hill from Jake Hill as the BMW tried to go between the two NAPA Racing Fords.

Dan Cammish would then run wide at Druids to drop away from the lead pack, leaving Hill to run in fourth behind Sutton, with Colin Turkington’s BMW sitting in ninth despite a clash with Dexter Patterson at Graham Hill Bend that saw the Infiniti run wide.

An off for Aron Taylor-Smith on the Grand Prix loop saw the race go behind the safety car, with Ingram nailing the restart on lap six to break away alongside Butcher, with Sutton dropping away from the lead pair as he looked to keep Hill’s BMW at bay.

Hill in turn was under pressure from the Cupra of Bobby Thompson, whilst behind, Turkington managed to fight ahead of Josh Cook’s Honda to move up into eighth – just before another caution when Rick Parfitt and Carl Boardley went off at Hawthorn’s.

On the second restart, Ingram again maintained his place at the front ahead of Butcher, with the duo pulling away from the squabble behind as Ingram grabbed a maximum score to move into the points lead.

Hill would try to get ahead of Sutton on the restart but instead found himself dropping briefly behind Thompson whilst the other BMW of Turkington nipped ahead of Cammish into seventh.

Hill and Thompson would continue to fight for position only to make contact at Graham Hill Bend, with Thompson running side and Hill losing position to both Adam Morgan and Turkington – only to then get straight back ahead of his WSR stablemate.

Hill cleared Morgan again within a lap to move back up into fourth spot and the finally made a move stick on Sutton – who found himself running without a turbo for much of the race – to take third two laps from the end.

As a result, Hill sits six points behind Ingram in third place in the points, with Sutton following him home in fourth to lie second to Ingram by three points.

Turkington grabbed fifth late on from Morgan to ensure he remains in mathematical contention.

Behind them, seventh spot for Thompson was good enough to wrap up the Jack Sears Trophy title with two races to spare ahead of George Gamble – who followed him home in eighth place.

Cammish and Stephen Jelley rounded out the top ten.