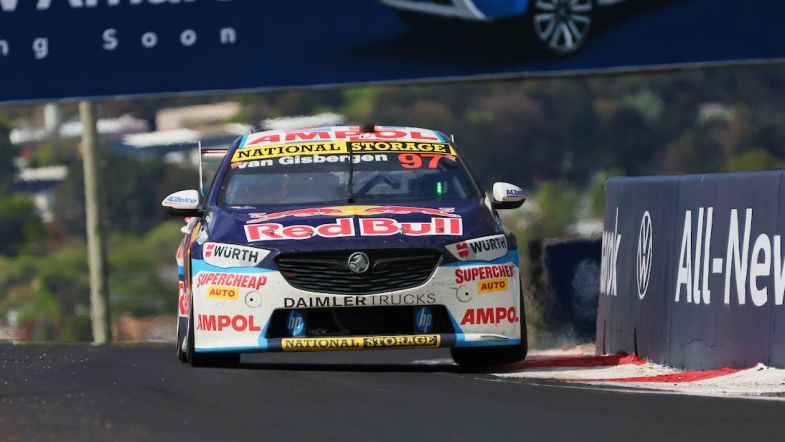 Shane van Gisbergen and Garth Tander defied difficult conditions and a penalty to win the 2022 Bathurst 1000 race, marking the last time that the Holden brand will feature in “The Great Race” in the best way possible.

The first lap was eventful, with several cars making contact on the Mountain Straight.

Jame Whincup hit standing water and got out of control, making contact with Jack Perkins, seeing them both spin. Zack Best was unable to avoid Perkins and hit the wall.

The incident brought the safety car out for four laps.

The 2022 Repco Bathurst 1000 is away and there is massive drama in the mid-pack!#RepcoSC #Bathurst1000 pic.twitter.com/Kyimp36BCU

But the field would soon be under safety car conditions again.

Tickford Racing driver Zane Goddard braked too late while trying to overtake Greg Murphy at The Chase and went over the wet grass, losing control over his car as he rejoined the track.

Goddard came right out in front of Dale Wood and Matt Campbell, resulting in a spectacular crash which saw all three cars out of the race.

That is a heavy hit!

We are under bp ultimate Safety Car again at the Repco Bathurst 1000 #RepcoSC #Bathurst1000 pic.twitter.com/jYBjf7OVNP

The race resumed again on lap ten and a light rainfall soon started, with all cars still on slicks. But the rain did not last for long and the track soon dried.

Lap 17 saw the safety car back on track after as Brodie Kostecki went off into the gravel at The Chase.

And this safety car period saw van Gisbergen receiving a five-second penalty for an unsafe release, hindering Alex Davison as he headed out of his pit box.

The fourth safety car session came shortly after the third as Davison hit the tyre wall at The Chase, then getting stuck in the gravel.

A fifth safety car session came on lap 40 after contact between Tim Blanchard and Nick Percat at Forrest Elbow, with Blanchard hitting the wall.

Triple Eight driver van Gisbergen held the lead of the race at this point and served his five-second penalty at his next stop, holding an eight-second lead at that point, while handing the car over to Tander.

Percat hit the wall at the Elbow on lap 78 but managed to limp back into the pits without triggering the safety car.

Chaz Mostert of Walkinshaw Andretti United headed the field until lap 104 when he headed in for a pit stop, handing the lead back to the #97 Holden Commodore of van Gisbergen/Tander.

The seventh bp ultimate Safety Car of the 2022 Repco Bathurst 1000 has been triggered. The field will be compressed. Game on! #RepcoSC #Bathurst1000 pic.twitter.com/ixWzSs9gkm

The eighth safety car session came as Davison hit the wall as the same place as Hazelwood.

This safety car session saw a controversial event for Brodie Kostecki who lost time at the pit exit after a stop due to a recovery vehicle getting in the way.

The incident enabled Mostert to get up into second place as the race restarted with 15 laps left.

Van Gisbergen held the lead as the field resumed racing, with Mostert keeping close behind.

The duo posted very close lap times, but the Triple Eight driver was able to keep the gap big enough to avoid being seriously challenged for the lead.

Cameron Waters with co-driver James Moffat rounded off the podium, just below six seconds behind.

Van Gisbergen heads the standings with a margin of 567 points over Waters ahead of the next race which will be held on October 28-30 at Surfers Paradise.

The Great Race has delivered once again!

In a perfect farewell to Holden at the Mountain, @shanevg97 and @GarthTander have won the Repco Bathurst 1000 🏆 #RepcoSC #Bathurst1000 pic.twitter.com/8WYJEQKgR9