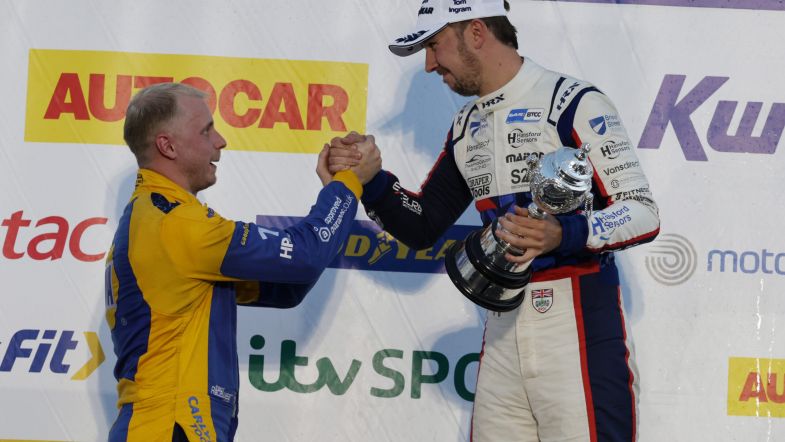 Ash Sutton insisted that he will come back stronger in his bid to reclaim the BTCC title after admitting that ‘the best man won’ during the season finale at Brands Hatch.

Sutton held a slender lead going into the finale ahead of Jake Hill and Tom Ingram, but was powerless to prevent Ingram storming to a maiden title on a weekend where he grabbed pole and then took two race wins.

Defending champion Sutton was forced to contend with a loss of turbo in race one but three top five finishes were still enough to ensure he ended the year as runner-up, beating Jake Hill by a point.

It means Sutton has finished inside the top two in four of his seven seasons in the series to date.

“Tom has fought for that title for so many years and I think the best man won,” Sutton admitted.

“We didn’t have the package to match him this weekend which is a shame, but it’s nice to see him win it and all the emotion come out. I haven’t told him yet that I’ve only loaned him it for a year though, and we’ll come back stronger next year to try and get it back!”

Sutton added he was proud of his performance on track, with the 382 points scored this season being more than in any of his three previous title winning campaigns.

“I think a lot of people had written us off earlier in the season but there was a lot of work that went into the car during the middle of the season to dial it in to the hybrid,” he said. “That allowed us to come back into contention and we got into a position where we were leading the way heading into the finale, but it wasn’t our day to win the trophy.

“We’re all hungry to win it and our focus over the winter will be on working towards that goal. However, it’s great that we were able to win the teams title for NAPA Racing in its first season – which is something we can all be proud of.”