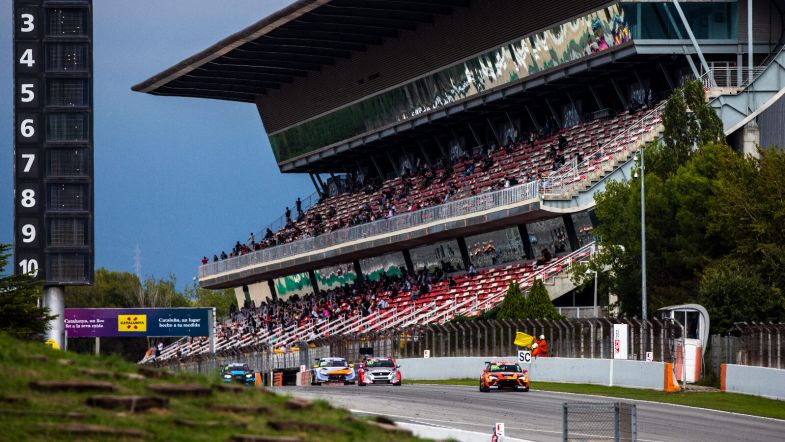 The TCR Europe season concludes at Barcelona this weekend with the title still yet to be decided and with new names on the grid.

Comtoyou Racing’s Franco Girolami could be crowned champion after qualifying, such is the size of his points lead over Target Competition’s Josh Files, and his team is also looking to wrap up a title of its own as it has a hefty margin over Files’ squad.

There are 89 points between Girolami and Files, with 96 available to score over the weekend. Files – the 2019 champion – is yet to win a race this year, while Girolami has three victories and is pursuing his first touring car title outside of his home country Argentina.

While only two drivers enter the weekend with the possibility of becoming champion, there are 10 who could end the season as runner-up. Chasing Files are the likes of Volcano Motorsport duo Klim Gavrilov and Isidro Callejas, Comtoyou’s Tom Coronel and his own team-mate Nicola Baldan.

Comtoyou will be fielding five drivers this weekend. Coronel, Girolami, Diamond Trophy winner Viktor Davidovski and Rookie classification champion Marco Butti will all be competing for Comtoyou Racing, but with only Coronel and Girolami nominated to score points in the teams’ championship, while 2021 World Touring Car Cup runner-up and long-time Comtoyou driver Frédéric Vervisch is entered under the Comtoyou Team Audi Sport banner and will be able to score teams’ points for that entity as the Belgian team seeks to steal away as many points as possible from rival Target.

Janík Motorsport has also revised its line-up, with Samuel Sládečka standing in for fellow Slovakian Mat’o Homola as he is ruled out of a second round in a row by a problematic wrist injury. Sládečka brings FIA European Touring Car Cup and years of GT racing experience to his TCR Europe debut.

To gain circuit experience ahead of the TCR Spain title decider at the same track, Teo Martín Motorsport will be entering its 19-year-old championship contender Alejandro Geppert in a Hyundai Elantra N this weekend. Geppert has won four races in the thinly contested championship this year.

Two half-hour practice sessions will run on Friday for the 23-car TCR Europe field, the second biggest entry list of the season, with qualifying taking place on Saturday morning at 09:45 local time (CEST). Race 1 follows at 14:05 and will run for 12 laps or 35 minutes, then Race 2 is on Sunday at 12:05.

It will be the fifth time that TCR Europe has visited Barcelona, and the third time the title has been decided at the circuit.