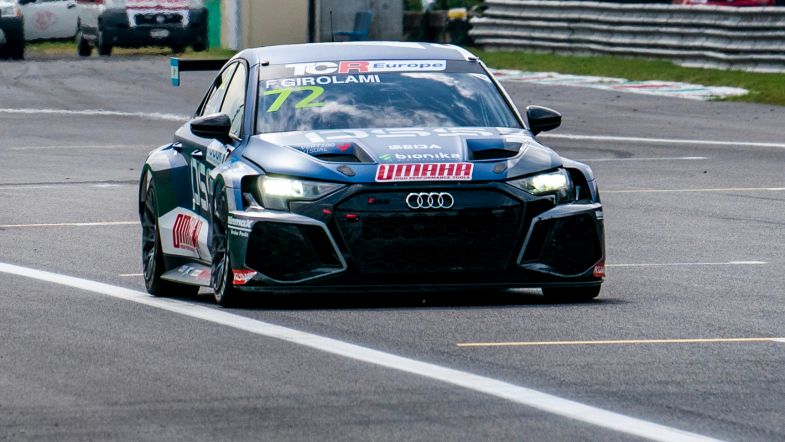 The Friday morning session was interrupted twice, first with a full course yellow after Janík Motorsport’s debutant Samuel Sládečka went off at turn one, but without causing too much damage to his car, and then there was a lengthy red flag stoppage after Girolami’s Comtoyou Racing team-mate Marco Butti hit mechanical trouble and his car had to be retrieved from the track. Frédéric Vervisch, competing in one of Comtoyou’s Audi RS 3 LMS IIs this weekend in a one-off appearance, also failed to make it back to the pits as the red flags were waved due to a suspension-related problem.

He spent two minutes at the top before Aggressive Team Italia’s Pepe Oriola set a 1:54.674 lap. He pitted immediately after, and Girolami’s team-mate Tom Coronel made use of clean air to set a 1:54.537 and move into first place.

Corone’s time at the head of the timesheet was prolonged by the red flag period, with the session clock paused during that time until retrieval of Butti’s car could actually take place.

It took a few laps for everyone to get back up to pace once practice restarted, and Halder Motorsport’s Jack Young was the first to better Coronel’s earlier benchmark. He set a 1:54.245, then Girolami went faster by 0.042 seconds. On a busy track there was little room for personal bests to be set after that, and the order stayed the same through the final minutes until the chequered flag waved.

Behind Girolami and Young were Coronel and Oriola, whose pre-red flags laps put them in third and fourth, then Volcano Motorsport’s Isidro Callejas went fifth fastest with a late effort.

Vervisch ended the session down in eighth, while Target Competition’s Josh Files – the only driver capable of stopping Girolami from winning the title this weekend – was ninth fastest and 0.884s off the pace. However his transponder was non-functional prior to the red flag, with only his laps after that being recorded by the timekeepers.