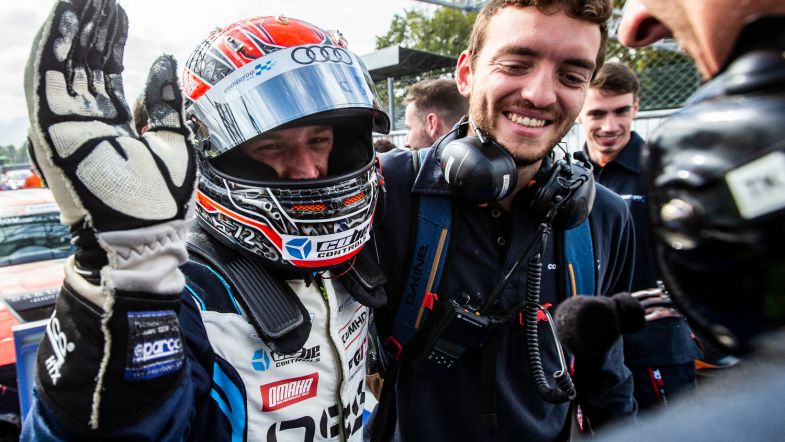 Franco Girolami claimed the TCR Europe title with two races to spare by qualifying fourth for the final round, and he explained how it was a pitstop that secured him an early crowning.

Having entered the weekend 89 points ahead, Girolami’s lead was cut by a single point in Q1 as title rival Josh Files scored four points for going third fastest and Girolami scored three by going fourth fastest.

That meant the pair went into Q2 split by 88 points, and with 90 points still up for grabs from Q2 and the weekend’s two races.

Target Competition driver Files was in fourth place for much of the session, which would have earned him seven points, while Girolami was out of the top 10 on pace and therefore would not score.

In the final four minutes both pitted, seemingly determining their session was over as their laptimes were not improving. Files got out of his Hyundai Elantra N TCR, whole Girolami stayed in his Audi RS 3 LMS II as his Comtoyou Racing team rushed to change the font tyres and got him back out on track with enough time to set one more flying lap.

He made the most of the opportunity, going fourth fastest and pushing Files down a place. That brought Girolami’s lead back up to 89 points, securing him the title. Although being outside of the top 10 still would have been enough to be crowned, his late strategy gamble firmly put the title out of Files’ reach.

“Really I think the tyre pressure was not 100% good. So the window of the tyre was a little bit late [on the first run],” Girolami explained to TouringCar Times.

“This is why with the team we take the decision to go in the box to put on new tyres. Now for the race we don’t have new tyres, but we wanted to finish the championship battle in qualifying. This is why we put two new tyres on, and we got the fourth place. So it’s a mega, mega position for both races.”

There was still drama afterwards for Girolami, as he earned a summoning to the stewards for not stopping in the pitlane at the end of Q2 to conduct a champion’s interview with the series’ media delegate.

The offence earned him a warning, and did not dampen his joy at becoming champion.

“I am so, so happy. I only can say thank you to Comtoyou Racing, my family, my brother, all the sponsors, [team-mate and coaching client] Viktor Davidovski for helping,” he added.

“I arrived 19 months ago here in Europe, and from the first moment, from the first day, I worked every, every day to arrive in this position and to get the championship. So I only can say thank you really, I think all the team deserve to be champion, and we did it. So now keep the focus on both of the races for today [and tomorrow]. I would like to win again.

“This title is very important, and in my racing career this is a mega, mega title. So I am so, so happy.”

Having now secured the crown, Girolami is now looking at stepping up into the FIA World Touring Car Cup before the end of the year.

“It’s not confirmed yet,” he said on Friday. “I’ve been working on it, but first of all I have a very, very big opportunity in front of me this weekend to fight and to win the championship. So I keep the focus on that. And after that, on Monday I will continue work on my future.”