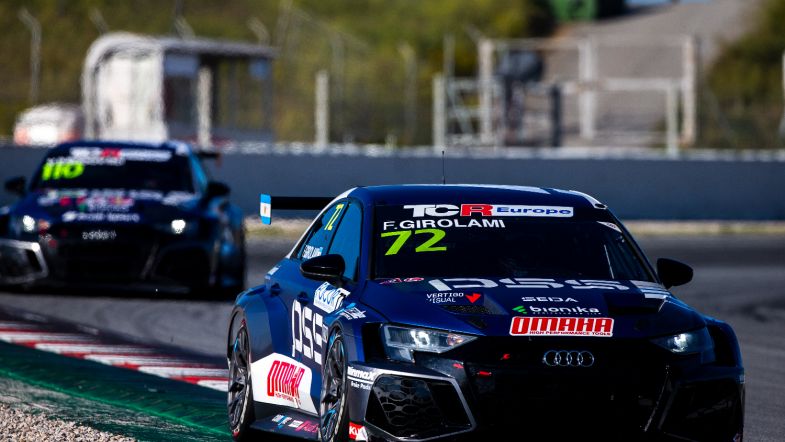 Comtoyou Racing’s Franco Girolami wrapped up the TCR Europe title in qualifying for the final round of the season at Barcelona, which was topped by Jack Young.

Girolami entered the weekend with a lead of 89 points over Target Competition’s Josh Files, with 96 points available to score at Barcelona and with 16 of those able to be earned during qualifying.

Janík Motorsport’s Jáchym Galáš set the pace at first in Q1, before Girolami’s team-mate Tom Coronel came to the fore. He was bettered by Files, while Girolami rose up to third place.

Young then set a 1:53.942 lap to go to the top of the times, and the Halder Motorsport driver was able to improve twice while many others failed to find more pace. Q1 ended with Young leading the way by 0.742 seconds over Coronel, with Files and Girolami in third and fourth.

Klim Gavrilov, who is in contention to finish second in the championship, failed to make it to Q2 by only going 13th fastest, while there was late drama for Felipe Fernández and the debuting Alejandro Geppert who had offs, while Comtoyou’s Marco Butti pulled off at the end of the session and Sergio López had to come to a stop on track as well with a smoking engine in his RC2 Junior Team-run Cupra León Competición.

Young went straight to the top in Q2, but this time did not improve on his early lap. However it was good enough for pole by 0.402s ahead of Coronel, who went off at turn one when pushing late on but avoided the barriers.

Isidro Callejas qualified third for Volcano Motorsport, and Girolami beat Files to fourth place after a strategic late lap. Both Files and Girolami had pitted with three-and-a-half minutes left of Q2, with their sessions seemingly done.

Files got out of his car, while Girolami’s team then rushed to change tyres and sent Girolami out again with just enough time on the clock for him to set a lap that took him from 12th place up to fourth.

That earned him an additional seven points, and means he goes into Race 1 at 14:20 (CEST) provisionally as champion as he holds an 89-point advantage and with only 80 available to score.

In addition to missing out on the title, Files will start from the back of the grid for race one due to an engine change. He will start sixth on the grid for Race 2, with John Filippi on the reversed-grid pole after going 10th fastest in Q2.