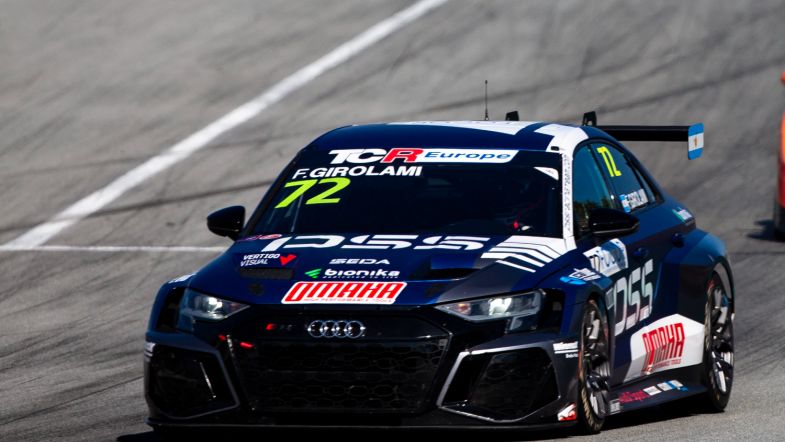 Franco Girolami finished his title-winning TCR Europe campaign with a dominant fourth win of the season at Barcelona.

Girolami led a Comtoyou Racing lockout of the podium in the final race of the year, with team-mate Tom Coronel in second place and Frédéric Vervisch, scoring points for Comtoyou Team Audi Sport, finishing third.

John Filippi and Pepe Oriola shared the front row of the reversed grid, with Vervisch and Nicola Baldan on row two and Girolami down in sixth. Just behind him were Josh Files and Coronel, the two lead contenders to be championship runner-up.

It took less than a lap for Girolami to get into the lead, passing two cars on the run down to turn one, getting by Vervisch exiting turn four and then going down the inside of the squabbling Filippi and Oriola at the final corner to move ahead.

From there he was untouchable, despite two safety car periods cutting his lead down, and he was helped considerably by Vervisch.

The Belgian drove on the grass own the pit straight as the field started lap two to do his own double move for second place, and he then bunched up the field as much as possible when the safety car was brought out due to John Filippi crashing out on lap two.

Filippi got loose at turn eight and his car started spinning, with a top from Josh Files behind making it even harder to control. He swung across the track and was trying to correct his Cupra Leon Competición but went into the path of Jack Young who tried to avoid Filippi but they ended up making contract several times as Filippi continued to head sideways and eventually into the gravel.

When racing resumed following the safety car period, Girolami’s lead had actually grown, although Vervisch too had a margin to Oriola who had to hold off Coronel at turn one. Although his defence worked, Oriola’s car then slowed to a halt as he was going down the pit straight two laps later and it meant the safety car was summoned again.

The gap between Girolami and Vervisch grew once more when the restart took place, and Coronel passed Vervisch into turn one once they could go racing again. Files tried to pass Vervisch too at turn four but got too close to the rear of the Audi driver and ended up dropping behind Mike Halder and Isidro Callejas.

Files got back by Callejas a corner later, but he then lost further places when the battling Jack Young and Klim Gavrilov drove into his path at the end of the lap. There was further drama for Files, all but securing Coronel the runner-up position, as he made up ground but when he went to reclaim a position from Gavrilov at the turn 10 hairpin the pair collided.

Files was on the painted asphalt inside of the actual corner, and Gavrilov continued to turn in until there was no room for Files to get back within the track limits. His nose was slightly ahead though, and as he tried to move back onto the track the pair made made contact and Files spun off.

He was able to get back on track but finished a distant 19th, meaning Coronel moved ahead into second in the standings by a comfortable margin.

The Comtoyou 1-2-3 at the front of the race was almost undone by Mike Halder and Jack Young, with the Halder Motorsport duo homing in on Vervisch in the final laps and finishing fourth and fifth.

Isidro Callejas was sixth, lifting him to fourth in the championship ahead of Gavrilov, with Young also gaining places to sixth in the standings past Nicola Baldan, who finished the race eighth behind Marco Butti.