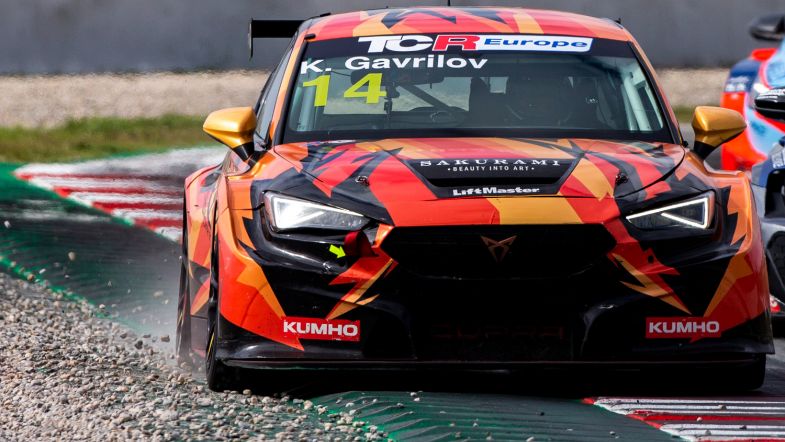 A post-race penalty for Klim Gavrilov has cost his team Volcano Motorsport second in the TCR Europe teams’ championship to Target Competition.

The season finale at Barcelona was full of on-track action, and Gavrilov diced with several drivers. The battle that got him into trouble was with Target driver Josh Files, who tried passing Gavrilov on the inside of the turn ten hairpin.

Files took to the painted asphalt on the inside of the corner as he made his move, and Gavrilov did not leave the gap of a car width to his left meaning Files had no room to get properly back on track as they headed uphill out of the corner. They made contact and Files spun off into the gravel, but was able to get back on track and finish 19th.

“There’s nothing to say,” an unhappy Files remarked to TouringCarTimes post-race. “The Volcano cars are idiots. In fact most of the cars on track were idiots, to be honest. Just smashing into the back of me like I didn’t exist, or I had a target on my back. But specifically the Volcano cars. They’ve done it all season and they never get a penalty, and they couldn’t have made it more obvious today.”

Gavrilov met the chequered flag in 12th place, having lost several positions by slowing down on the pit straight after his incident with Files.

The stewards still decided to hand Gavrilov a ten-second penalty, which dropped him to 16th place and meant he scored zero points rather than seven.

A five-second penalty was also handed to RC2 Junior Team’s Felipe Fernández, dropping him from 17th to 18th, after he ran into the back of Janík Motorsport’s Samuel Sládečka during a safety car period.

The implications of Gavrilov’s penalty and decreased points means Volcano Motorsport finish the season on 579 points, with Target ending the year on 581 points and taking the runner-up spot in the teams’ championship from its rival.