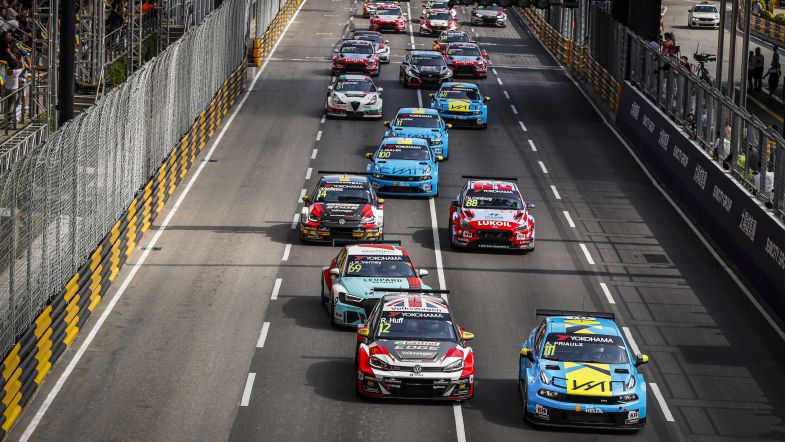 Eight summers ago, at a time when national championships were struggling and World Touring Car Championship projects were being shelved, Marcelo Lotti created new touring car regulations and established what was then known as the TC3 International Series.

Once the concept had become reality, TC3’s name had become TCR and there were series across Europe quickly being established. While the health of national championships has grown, with TCR now the basis of close to 20 national and regional series across the globe, the very top level of touring car racing has hit new obstacles.

In 2018 the FIA adopted Lotti’s TCR regulations for the WTCC, with it becoming the World Touring Car Cup as a result, and now his ideas are being used again in WTCR’s recently announced successor: The TCR World Tour.

TouringCarTimes was the first media to speak to Lotti following the announcement of the FIA reviewing the future of WTCR, and then the follow-up launch of a TCR World Ranking and the reveal of 2023’s World Tour.

“The idea was coming three years ago,” said Lotti to TouringCarTimes. “To have one world ranking, first of all you have to think what is the platform – and now TCR is growing and growing with number of cars and championships and drivers. So we decided to start to study the formula. First of all the parameters and everything to do with scoring points to avoid the mistakes. We made a lot of tests.” The World Ranking includes all national-level series and above in the world that cater either exclusively for TCR cars or have a licensed TCR class, and takes drivers’ most recent results to give them a score.

The value of results in each series is determined by two coefficients. One is based on a series’ scale, with WTCR at the top, TCR Europe in the band below and then national series below that, followed by endurance series and multi-class events. The other coefficient is a formula that uses grid sizes to determine individual races’ value.

“The last six months we worked on that side. And after that, it was in plan to launch the world ranking I think 28th or 29th September. But after the news from Discovery [Sports Events, WTCR’s promoter] that it was intending to change the format of WTCR, it meant we decided to postpone because it’s very important news.

“Teams that are normally running in the WTCR have big structures; they cannot keep alive the structure for [just] one race per year. We accepted the decision of Discovery, who we have had a collaboration for a long time.”

“We decided to base this event around existing events, so nothing to do new, and also to have more interaction with the national championships, national teams, regional teams, together with more professional teams – and drivers. So we discussed with Discovery to see why not just one World Cup will become the final,” said Lotti.

Lotti is indicating that the FIA World Cup status currently held by WTCR could be transferred to the proposed TCR World Final, but it all depends on the FIA certifying next year’s plans. 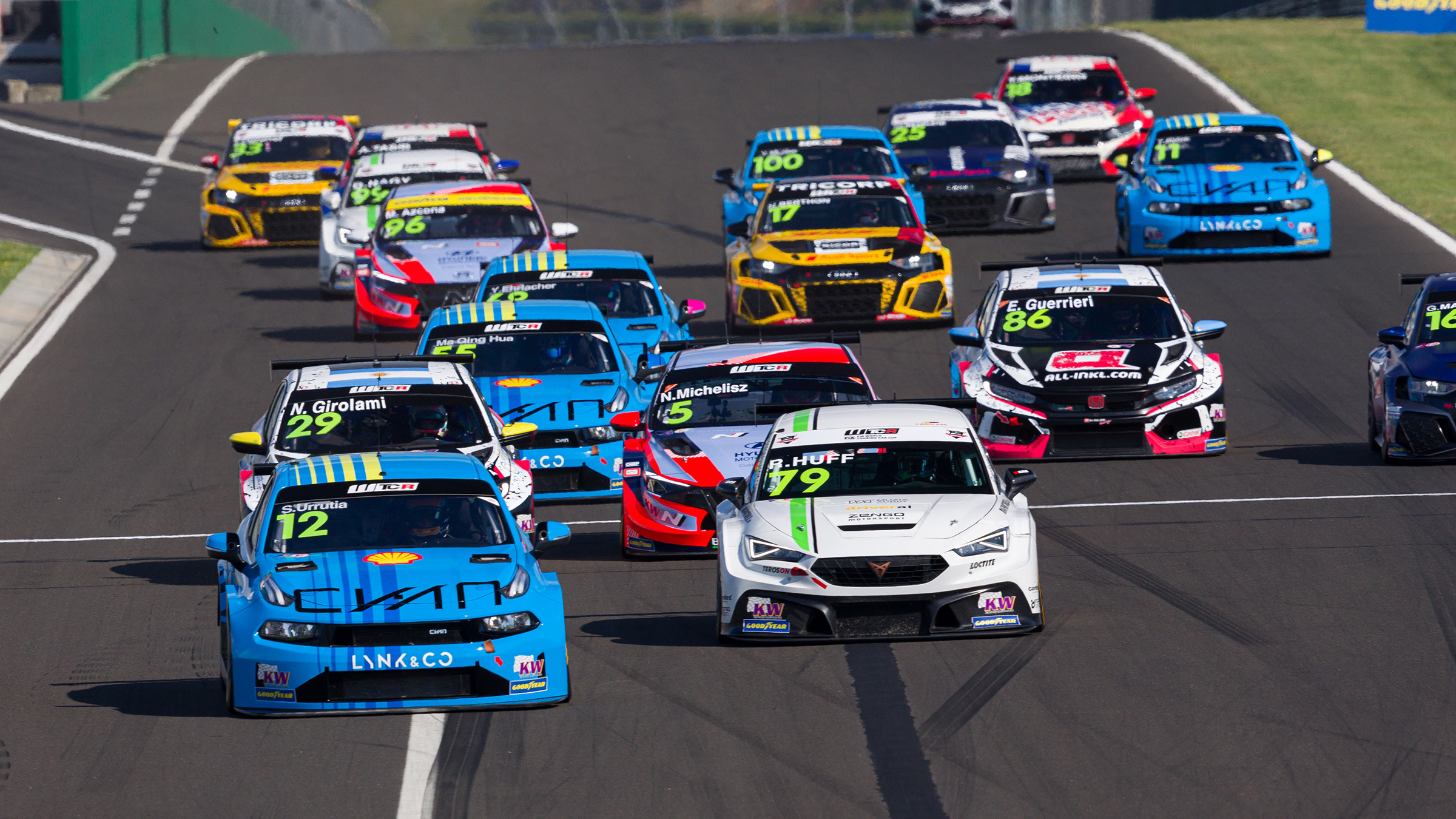 A continuation of the collaboration with Discovery into 2023 may be controversial in the paddocks, and the head of the company François Ribeiro has said that the option on its contract with the FIA to promote World Touring Cars for the next three years has not been exercised.

But Lotti did not say he would step into the promoter role when asked what his official position would be in World Tour operations going forward.

“The World Final could be [an FIA event],” said Lotti.

“Now it’s not decided. The FIA have to give their position. Discovery is open to discuss with them, we are open to take the final decision of Discovery, and probably in ten days or two weeks we know if everything remains like it is today with the collaboration of Discovery and the FIA to make the last one. We decided to postpone [our news], and co-ordinated the launch of the ranking the same day as the other news.”

One noticeable part of the rankings launch was a sub-classification for drivers scoring points on Kumho tyres. TCR Europe switched to the manufacturer for this season, and Lotti confirmed it will be the spec tyre supplier for the World Tour. So where will the nine-event tour race?

“The nine events, we want to give a level in terms of exposure, in terms of everything, on-site, on air, everywhere, the level of the world event [of now]. This is the intention,” said Lotti.

“We don’t go to create new events, we go to select existing events in the different championships. For example, we will start in Europe with the World Tour. We start here, and the first three events of the TCR Europe will be World Tour events.

“And after another one in the middle, we make one European, I think the second one [of the tour] will be in Italy linked to another championship, and after the two [next TCR Europe rounds] we go to South America and after we go to Australia.” 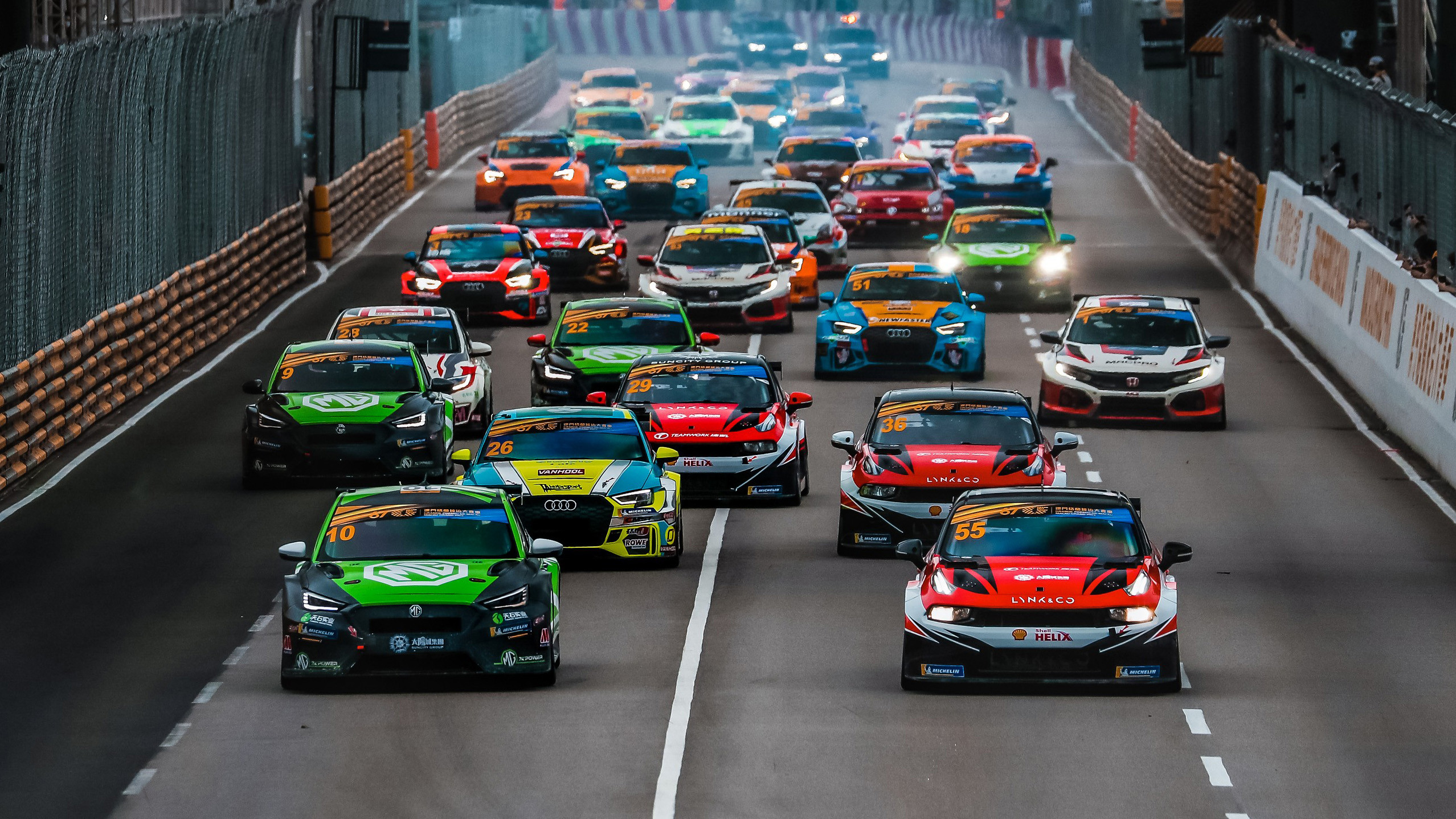 If everything goes to plan and the zero-COVID-19 policy is relaxed by next November, then the tour will race in four continents with a trip to Macau.

Although the grand prix’s usual end-of-year date would make it a logical event to be the World Final, the need to accommodate 60 TCR cars (the intended entry list size) in addition to the other series racing there makes it more likely to be the World Tour finale. And whatever format the other existing events run to, the World Tour will adopt with no changes.

“For Europe we closed [the deals], for South America it’s closed, but in Australia it’s closed but we are in negotiations – you can say that we are working to finalise this calendar,” said Lotti.

“It’s under working, because I haven’t signed the agreements [for the latter rounds]. Normally I shake hands, and it’s done. The calendar will be this one, but you understand [it’s not all signed].”

There’s no official word on what individual honours the top scorer in the end-of-season TCR World Tour classification will get, but the plan is for the World Final winner to be crowned a champion (unless of course the FIA decides the event will have a World Cup winner instead).

“The concept of the ranking is first of all to have this kind of opportunity to have any driver in the world to have a little bit more international exposure, and opportunity,” Lotti explains.

“And to have the grand final with these 60 cars. And this was first. So now, because in the world rankings if you don’t run or you don’t score points, it’s difficult to reach the 45. If you do not have one [full] championship to do. And we believe that is not correct, to not taking care about all the situations of the different drivers and teams that are [in] our family [of] events.

“It will be very difficult with six events [in your schedule] to be in the 45.

“So we say to give to all of them the opportunity to do it, we decided to [from] this nine events, the top 15 go directly to the final independent of their position in the ranking. And this for me is the target of this.” 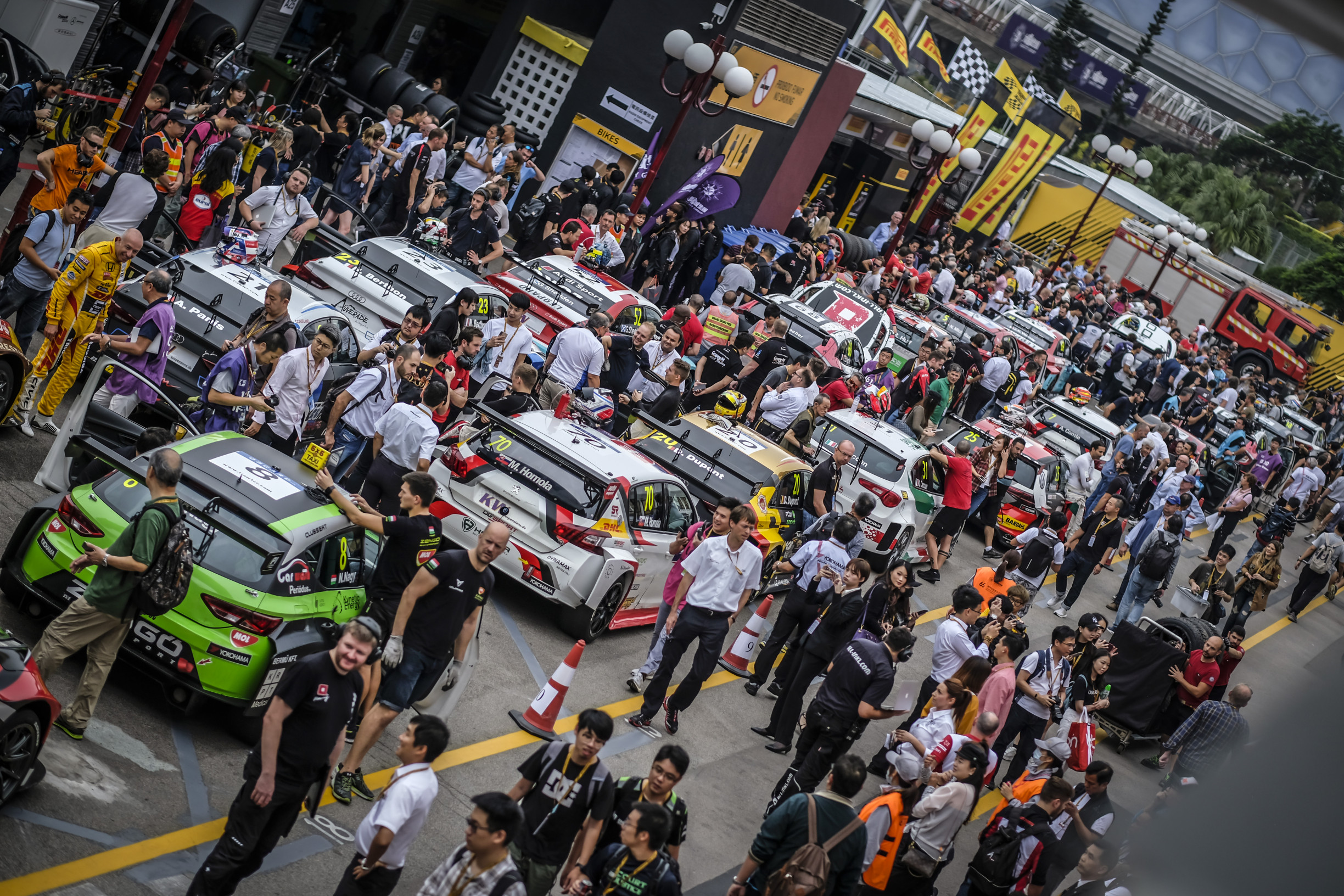 Lotti is already aware that opening up the biggest event of the year to 60 cars means there will be drivers and teams from all around the world that would have qualified for entry via the ranking, and the World Tour calendar will take costs for smaller racing operations into consideration too.

“Clearly we have to discover to place where we could be easily to have teams coming from outside or different continents to have opportunities to rent a car. Because if they start to transport their team and car, it becomes too expensive and is not linked to what we want for this TCR,” said Lotti.

“I think this is something that is really perfect for TCR. Because using this, the platform, the TCR regs, go to run in national championship events, regional championship events, then all the teams join this event together and all the teams can have the opportunity to compete with probably some top professional drivers. They can tell their performance [against them], and we go really to make this connectivity between all of them, and we believe that this goes to growing and growing this family atmosphere that I want in TCR.”

To provide continuity for the entrants doing all nine World Tour events, Lotti’s team will “bring one driver [steward] throughout the season, and we will bring also one electronics and technical [person] for us, that help the technical delegate at all the events.

“The teams that decide to follow the nine events have to have the feeling that this is stable, not that sometimes there is a steward or a race director that says, ‘okay, red flag for this’ and the other one says ‘black flag for that’. No way, it doesn’t work like that. Another way.”

The immediate reaction to the TCR World Rankings, particularly from people trying to understand, was to compare it to player rankings used in golf and tennis. Lotti prefers the metaphor of sailing’s America’s Cup to describe his new projects.

“All the competitors fight for the Prada Cup. And the winner of the Prada Cup goes to fight with the defender of the America’s Cup. This is, change the number, put more sailing boats in it, but this is the concept, you understand?” said Lotti. However the World Final is not the only end-of-year TCR contest aiming to attract the best drivers and teams possible with an FIA title and a valued prize, because the FIA Motorsport Games Touring Car Cup also exists, has the same coefficient value as WTCR and this year’s edition takes place next weekend. How does Lotti expect the two to co-exist?

“I want to say, you say something that is yes and no. So that means Motorsport Games is one driver for country, first. So you cannot find really the best,” said Lotti.

“And it is a little bit like the new categories in the Olympics, like golf. I never saw Tiger Woods go to the Olympic Games. So it’s very good, but not probably the top of the world ranking of golf [participating]. And this is for me Motorsport Games.

“[There] will be very good drivers from some countries, but also there is drivers that have less experience from other countries. And it’s good because that gives the opportunity to fight for this gold medal, and silver and bronze, but this is a very, very different concept I think compared with our World Final. Our final, I think will be, really you can see all the best.”

But with 60 cars and a knockout format over several days that could lead to a less-established name taking ultimate honours, the two events may not be totally different ideas. And with over six months before the 2023 TCR Europe season – and therefore the World Tour – begins at Algarve, there’s no guarantee that concept will be absolutely the same as described once it becomes reality.