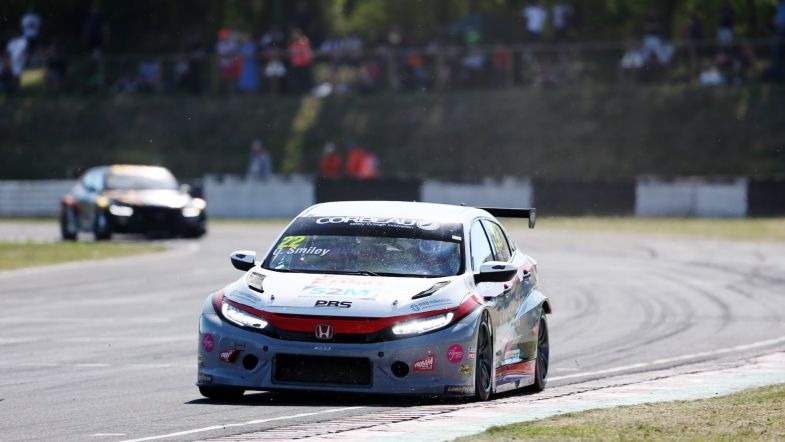 Chris Smiley has moved closer to the 2022 TCR UK title by winning the penultimate race of the season at Snetterton, his second of 2022, beating title rival Isaac Smith by close to six seconds.

The circuit was hit by a heavy rain shower just before the start, meaning a start behind the safety car for the field.

Honda driver Smiley made a strong start as the safety car headed into the pits, while Bradley Kent made the move on Bradley Hutchison for second before the end of the first racing lap.

But Hyundai driver Kent went off on lap five, dropping from second to fourth. And things went from bad to worse for the Essex & Kent Motorsport driver who retired with a technical issue on lap ten.

This left Audi driver Hutchison in a fight for second with Volkswagen driver Smith.

Smith was able to make the move stick at the start of lap eleven, storming on to claim the fastest lap of the race.

But he could not get close enough to title rival Smiley who won the race by 5.8 seconds while Hutchison was a distant third, 9.8 seconds behind.

Cupra driver Callum Newsham finished fourth ahead of Power Maxed Racing team-mate Jac Constable who fought his way from the back of the grid to finish fifth.

Bruce Winfield rounded off the top six for Area Motorsport.

Smiley’s victory has handed him an eight-point lead ahead of the last race. But the title race is wide open as there is still 41 points left to be fought for in the last race of the season which starts at 15:30 local time/16:30 CEST.

Smiley will start tenth and Smith ninth in the reversed grid of the final race, with Cupra driver Russell Joyce on pole.

Update: Joyce was handed a three-place penalty for causing a collision, handing pole to Matthew Wilson.