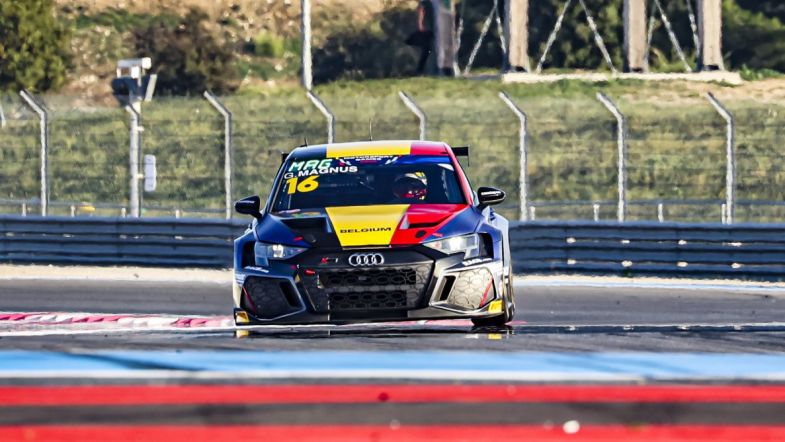 Gilles Magnus continued his session-topping form at the Motorsport Games by taking pole position in the Touring Car Cup.

The Comtoyou Racing driver was fastest in both practice sessions at Paul Ricard, then immediately went to the top in qualifying – held at dusk on Saturday night – with a 2:12.492 lap.

The Belgian remained on top through the first 10 minutes until Ireland’s Jack Young, in a ALM Motorsport-run Honda Civic Type R, went fastest by 0.073 seconds.

Magnus briefly reclaimed provisional pole position five minutes later, only for his lap to be deleted due to a track limits violation, and he was then shuffled down to third when Comtoyou team-mate Tom Coronel went 0.139s faster than Young.

After spending time in the pits, Young returned to track and also first place on the timesheet as he set a 2:11.975 lap. That occurred with 10 minutes left on the clock, and a minute later Magnus crossed the line and bettered him by 0.144s.

Once there was confirmation that his lap would not be deleted, Magnus headed to the pits to see out the rest of the action.

Young looked like he had the pace to improve, but had an off and also encountered traffic, while Magnus’s fellow Audi RS 3 LMS driver Coronel – representing the Netherlands – was rapid in the final sector but not fast enough in the first one and his final lap left him 0.135s short of pole but did bring him past Young onto the front row of the Qualification Race.

Sweden’s Andreas Bäckman made it three Audis in the top four, but was over half a second off third place, and Spain’s Isidro Callejas had laps deleted early on but kept it clean later in qualifying to secure fifth place.

That shuffled Argentina’s Ignacio Montenegro down to sixth, and France’s Teddy Clairet down to seventh after he posted an improvement in the final five minutes.

Among the many drivers who lost laps to track limits violations, Gabriel Lusquiños was the most extreme of those as the Swiss driver had every single one of his laps be deleted until he posted a 2:13.573 with less than two-and-a-half minutes to go. That was enough to put him in 10th place.

The first race of the weekend starts at 11:30 CEST tomorrow.