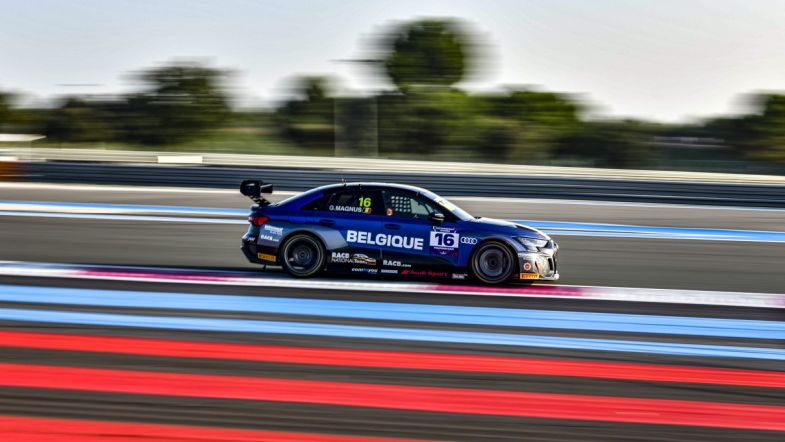 The Belgian was one of several drivers to reach the top of the times during the Saturday session, with local representative Teddy Clairet initially setting the pace at first in his self-run Peugeot 308.

In what would become the theme of the session, as it was in first practice, his lap was then deleted due to track limits violations and Spain’s Isidro Callejas took over at the top. Brazil’s Raphael Reis was his closest opponent, but both then had their laps deleted and that shuffled Magnus to first place.

The Audi RS 3 LMS driver only spent a short while ahead before Clairet set a 2:15.358 to head Andreas Bäckman, another of Comtoyou’s drivers. He then went fastest before Callejas rebounded to become the first driver to lap in the 2:13s.

Only 10 drivers had a lap on the timesheet after 10 minutes, with efforts frequently deleted over track limits.

Magnus returned to first place a few minutes later with a 2:13.438 lap that put him over a second clear of second-placed Callejas, who had his fastest lap deleted.

Comtoyou team-mate Tom Coronel finally set a lap that counted after 14 minutes, but it was short-lived as he had another deletion and dropped back to 16th. At the same time, Ireland’s Jack Young claimed provisional top spot with a 2:12.175 lap.

On his next effort he rose back up to fourth place, behind Hong Kong’s ALM Motorsport-run Andy Yan, leaving Reis as the only driver yet to set a lap that had not exceeded track limits.

There was little change towards the top of the leaderboard in the next 10 minutes, bar Yan’s team-mate Ignacio Montenegro going third fastest for Argentina.

In the final five minutes there was more action as those whose true pace was masked by having their fastest laps deleted sought to move up the order.

Magnus stole back first place from Young by improving to 2:11.942, and Clairet wasted his chance of getting involved in the fight to be fastest as he almost spun while on full attack. Coronel gained by going third fastest, demoting Montenegro to fourth, and Reis eventually set several laps that stood and he ended up in 11th place.

Young looked set to improve twice at the end but encountered traffic both times, ensuring Magnus ended second practice on top. The session finished with the black-and-white flag being shown to Clairet and Italy’s Giacomo Ghermandi for repeated track limits abuse.