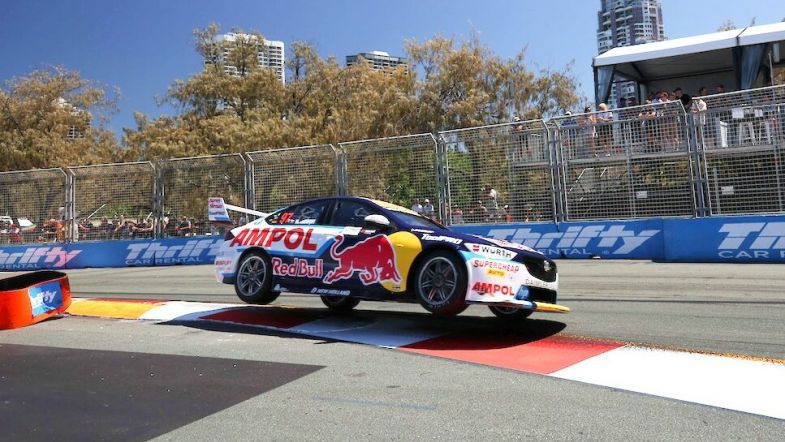 The Bathurst 1000 winner started second on the grid but assumed the lead after an assertive pass on Grove Racing’s David Reynolds, who overcame a steering wheel issue and fierce pressure from Chaz Mostert to finish a distant runner-up at the end.

Van Gisbergen’s victory was a staggering 20th of the season and 12th out of the last 13 races, demonstrating the sheer dominance of his year.

“It’s pretty special to see the guys and how much effort they’ve put in and how good our car is, I’m stoked,” said Van Gisbergen post-race.

“David was so fast at the start but then he dumped his tyres so it was all good [for me], it was good fun racing him again as we haven’t raced like that for a while.”

Having taken his second pole position of the season with a brilliant lap in the Top 10 shootout, Reynolds led away off the line, beating Van Gisbergen into the first corner as the entire field got through the first lap without incident.

Behind, Waters held onto third ahead of Mostert, with the Shell V Power Mustang of Anton de Pasquale one place back in fourth.

Despite clipping the stack of tyres on the entry to the final corner and dropping back from the lead, Van Gisbergen had a clear pace advantage over Reynolds and began to pressurise the Grove Racing driver.

Reynolds defended well at turn three on the 12th lap of 85 as Van Gisbergen got briefly alongside, but the Holden managed to slice down the inside to seize the lead in a near-identical move the following lap.

Van Gisbergen took more kerb at the chicane and braked slightly later than Reynolds into the turn three hairpin to get his Commodore alongside at the apex.

Reynolds pitted before Van Gisbergen, on lap 25 and took on less fuel than the leader in an attempt to reduce what had been a 1.12s deficit. Van Gisbergen, keen not to be undercut, came in the following lap and rejoined marginally in front.

Van Gisbergen then began to ease away at the head of the field as Reynolds struggled with a loose steering wheel, an issue which he was forced to take all the way to his second stop, having shipped upwards of five seconds.

This dropped Reynolds into the clutches of Mostert whose assault on the Mustang was interrupted by a charging Will Davison, who produced a superb recovery drive through the field after a slow first pit-stop cost him time.

Davison started ninth and moved up a position at the start before getting stuck behind the Holden of Brodie Kostecki. Electing to pit on lap nine, Davison was delayed by a slow right rear tyre change which dropped him down the order.

But a sensational drive back up the field, and equally efficient tyre management brought him onto the back of Mostert’s WAU Holden in the closing stages, just falling short of a podium finish.

That allowed Reynolds to build enough of a margin to consolidate second at the end, but only by nine-tenths. Reynolds’ team managed to tighten the loose steering wheel at the second pit-stop and send their man back out in front of the Holden of Mostert.

While Reynolds was able to rejoin the race, others fared less well. Erebus Racing’s Will Brown retired with a power steering failure while Brad Jones Racing’s Andre Heimgartner was forced out with a misfire.

Tickford’s Cam Waters almost joined them on the sidelines after smacking the wall on the exit of turn one. Running fourth at the time after losing third to Mostert, the Mustang got loose over the kerbs and clipped the end of the tyre wall before spinning on exit. He pitted along with Mostert at the end of the lap and miraculously continued without significant damage.

He finished fifth at the end, following a late pass on De Pasquale.

Meanwhile, out in front, Van Gisbergen was imperious and duly strolled to victory by over 16 seconds from Reynolds and Mostert, with Davison fourth.

Race two on the Gold Coast is scheduled to start on Sunday at 05:15 CET.