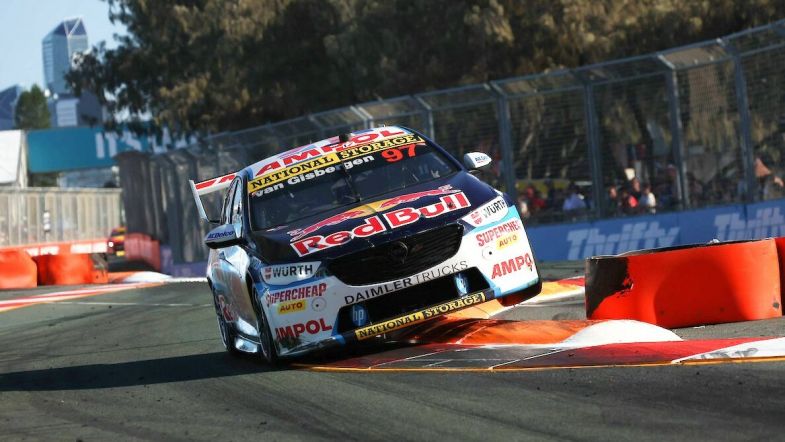 No fewer than 11 cars were involved in the incident which was triggered when the PremiAir Holden of James Golding lost control at turn nine on the exit of the fast chicane on the back straight after clipping a tyre stack.

That sent him into the wall, with the Tickford Ford Mustang of Thomas Randle taking avoiding action into the wall.

Further back, chaos ensued as James Courtney got into the back of Broc Feeney’s Red Bull Ampol Holden with Lee Holdsworth ramming the back of Courtney.

The biggest damage was caused when the Walkinshaw Andretti United car of Nick Percat slammed into the passenger door of Golding, leaving Macauly Jones nowhere to go; he smashed into the rear of Percat’s car which caused Jones’ Holden to catch fire.

The race was immediately red flagged while the debris and cars were cleared up.

Steering his way through the mess was Chris Pither in the second PremiAir car, but almost half the field had some kind of damage.

Along with Courtney, Jones, Percat and Golding, Grove Racing’s Lee Holdsworth and Todd Hazelwood were also forced out of the race before the safety car restart, while Jack Le Brocq and Bryce Fullwood pitted for additional repairs and a tyre change as action resumed.

All angles of the red-flag incident.

At least 10 cars appear to be out of the Sunday race after this Lap 4 crash #RepcoSC pic.twitter.com/T94rjKyImW

Before the red flag, the race had got off to a frenetic start at the front.

Polesitter Van Gisbergen and Davison got an even getaway off the line and ran side-by-side into the first corner, with Davison shortcutting the chicane and taking the lead after getting a thump from Mostert’s WAU Holden under braking.

Mostert also jumped the chicane and took third from Tickford Racing’s Cam Waters, with Brodie Kostecki getting ahead of Scott Pye as the pair duked it out on the approach to turn seven on the second lap.

The race restarted after five laps behind the safety car, with Davison leading Van Gisbergen, Mostert, Waters and Kostecki.

Van Gisbergen glued his Holden onto the back of Davison’s car, which appeared to struggled on the first few laps after the restart, and dived down the inside for the lead at turn 11 to snatch the lead from the Ford driver.

From there, Van Gisbergen opened up a healthy margin of over four seconds from Davison who in turn had a small margin over Mostert who pitted at the end of lap 23 for his first mandatory stop.

WAU short-filled Mostert’s car at the stop which cycled the #25 car into the lead ahead of Davison and Van Gisbergen who took on more fuel.

Despite a lighter car, Mostert couldn’t build a margin over Van Gisbergen, who closed right in on the WAU car just before the second round of stops on lap 46. Mostert peeled in first after getting caught by Van Gisbergen, but was able to consolidate second place ahead of Davison.

Behind Davison in fourth was David Reynolds who, after struggling with a failed cool suit in race one, fared substantially better in the second 250km race, leapfrogging Waters’ Tickford Mustang.

Waters had run fourth in the opening stages but got held up in a five-car train behind the Erebus Holden of Will Brown before the second stops. He got by Brodie Kostecki and Pye before coming in and emerged from the stop just over two seconds adrift of Reynolds.

Although he had dominated since taking the lead, Van Gisbergen’s advantage was negated in the closing stages as the safety car was deployed for Thomas Randle’s Tickford Mustang which had stopped on the exit of the final corner.

That bunched the pack up once more but any concerns that Van Gisbergen would be vulnerable to Mostert at the restart were dispelled as the champion made a superb getaway.

Mostert followed Van Gisbergen hard early on but couldn’t match the pace of the leader and eventually came home a fraction over two seconds adrift at the finish.

Reynolds took fourth behind Mostert and Davison, with Kostecki fifth after a late scuffle with Waters at turn four despite slight contact between the pair. Winterbottom also got past Waters before the end to claim sixth.

Waters was seventh ahead of Will Brown who finished eighth on the road, but the Erebus driver was handed a 15-second post-race time penalty for his role in turning around Pye at the final corner.

That elevated Andre Heimgartner to eighth with Pither ninth ahead of Anton de Pasquale who rounded out the top 10.