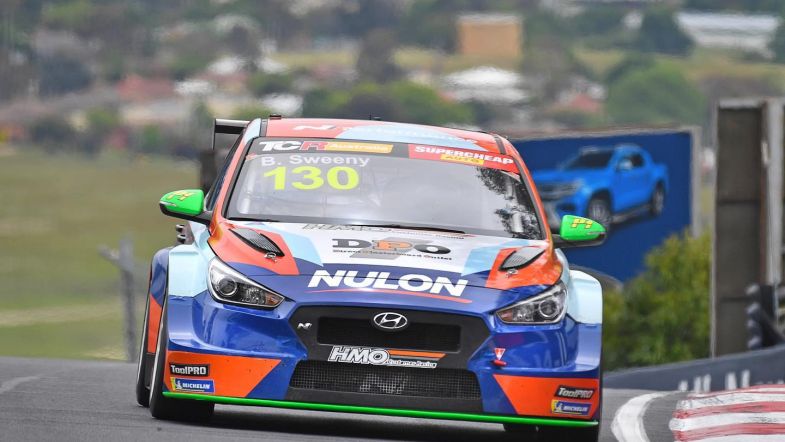 Bailey Sweeny claimed victory in the first TCR Australia race of the Bathurst International weekend which was interrupted by kangaroos, beating Dylan O’Keeffe by close to two seconds to the line.

The Hyundai driver started from pole and claimed the lead as the lights went out.

The safety car was called into action on lap 12 as kangaroos were spotted close to the circuit.

But Hanson ended his chances on his own, clouting the wall at The Cutting on lap 17, retiring from the race.

This left Sweeny by himself at the top, with GRM Peugeot driver O’Keeffe finishing second ahead of Sweeny’s HMO Hyundai team-mate in third.

Title contender Will Brown finished seventh for Melbourne Performance Centre Audi ahead of Lachlan Mineef and Jordan Cox in ninth.

Cox, who is placed second overall, made contact with Hyundai driver Luke King on the penultimate lap. The contact resulted in a puncture for King who dropped down to 17th, while Cox finished ninth.

Frenchman Teddy Clairet finished tenth behind the wheel of his Peugeot 308TCR, meaning that he will start from the reversed grid pole position in Race 2 tomorrow.

Points leader Tony D’Alberto could only manage 12th for Wall Racing Honda, leading the standings by 35 points over Cox.