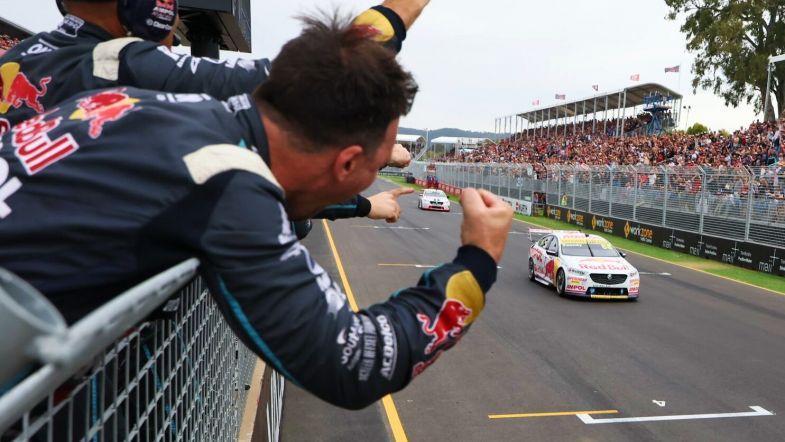 Red Bull Ampol Racing’s Broc Feeney claimed his maiden Supercars victory in the final race of the 2022 season at Adelaide, fending off Chaz Mostert’s attack in the closing stages.

Feeney started third on the grid and cycled to the front of the order with an off-sequence strategy after pitting a lap before the first of two safety cars.

He then made the most of an error from Will Davison to grab the lead, which he then maintained despite coming under pressure from Walkinshaw Andretti United’s Mostert towards the end.

De Pasquale led a Shell V Power Racing one-two on the grid after producing a superb lap in the top 10 shootout earlier in the day, and successfully fended off team-mate Will Davison off the line to retain the lead into turn one.

Behind, champion-elect Shane Van Gisbergen slotted into third place ahead of team-mate Feeney, who in turn had race one winner Chaz Mostert for company as he defended fourth on the opening lap.

As the field settled into an early rhythm, De Pasquale opened up a lead of just over a second from Davison, who managed to edge away from Van Gisbergen before the first set of mandatory stops began.

Of the leading runners, Feeney was the first to peel in, on the 11th lap of 78, while Shell V Power Racing brought Davison in a lap later to cover off the Holden driver.

That strategy call appeared to pay off as Davison came back out just ahead of Feeney, and the pair cycled to the front as Jake Kostecki brought out the safety car six laps later after hitting the wall at turn eight.

Kostecki ran wide coming through the high-speed turn eight, with the impact ripping off the left-front wheel violently. The wheel then ricocheted back into the way of the oncoming Team 18 car of Scott Pye.

The safety car intervention brought those cars who hadn’t pitted in at the end of the lap, with De Pasquale retaining track position ahead of Van Gisbergen.

Now off sequence on pit strategy, Davison and Feeney led off the restart from De Pasquale as Van Gisbergen dropped to eighth after being hung out to dry on the outside of turn five while trying to pass Penrite Racing’s David Reynolds.

Davison then gifted Feeney the lead of the race after locking up and running too deep at the hairpin and the Red Bull driver wasted no time in building a margin out front.

Feeney’s lead had grown to nearly five seconds by the time Davison flew off the road at turn 10, briefly touching the tyre wall before rejoining. That then expedited Davison’s second compulsory stop.

Shell V Power’s fortunes were then compounded as De Pasquale ran deep at the final corner which allowed Van Gisbergen to make it a Red Bull one-two ahead of the second stops.

Much like the first stops, a safety car for Bryce Fullwood hitting the wall at turn eight ensured everyone came in at the end of lap 43, with Red Bull forced to double stack for Feeney and Van Gisbergen.

De Pasquale lost out to Mostert in the crowded pit-lane as Feeney retained the lead, while Van Gisbergen emerged all the way down in 12th.

Van Gisbergen’s charge up to third was sensational but ultimately in vain as the Kiwi was handed a penalty for a safety car restart infringement by the race stewards.

He was deemed to have overlapped with the Penrite Racing Mustang of Lee Holdsworth. Van Gisbergen was subsequently handed a drivethrough penalty and finished seventh.

Meanwhile, Mostert was all over the back of Feeney for the lead of the race, but Feeney held firm to remain in front.

Back down the order, Davison’s race turned even more sour after an overzealous overtaking attempt at the hairpin sent himself, Reynolds and the Tickford Ford of James Courtney spinning.

With Van Gisbergen out of the running with just under 15 laps remaining, Feeney held his nerve to come home marginally ahead of Mostert at the finish, with De Pasquale moving back into third to complete the podium.

Cam Waters finished fourth after a brief brush with the wall 20 laps from the end -while fighting De Pasquale – which had given Van Gisbergen track position, while Andre Heimgatner was fifth.

Erebus Racing’s Will Brown was sixth ahead of Van Gisbergen, with Brodie Kostecki leading home Holdsworth and James Golding.