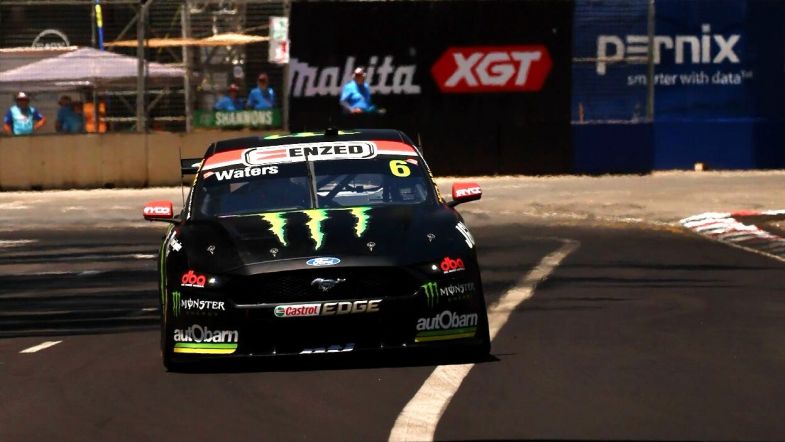 Tickford Racing’s Cam Waters set the quickest time in qualifying for the final Supercars race of the current generation of cars ahead of the top 10 shootout at Adelaide.

Waters, who led for much of Saturday’s opening race from pole position before hitting Bryce Fullwood towards the end, set a best time of 1:19.109 to end up just over six-hundredths of a second faster than Shell V Power Racing’s Anton De Pasquale.

With the potential of bad weather lurking on the horizon, many cars elected to head out on new rubber at the start of the session, with the Tickford pairing of James Courtney and Thomas Randle keen to bang in lap-times early on.

They did not feature among the top 10 runners by the end of the 15-minute session, with Randle 15th and Courtney 18th on the grid.

Waters soon hit the front but was quickly beaten by the Red Bull Ampol Racing Holden of Broc Feeney, who in turn was bested by Van Gisbergen.

Andre Heimgartner moved into second after setting the ultimate best first sector, but dropping three-tenths in the final sector.

As the cars headed back out for their final runs, it was Waters who ultimately set his best time on his first flying lap, beating Van Gisbergen by over two tenths while Erebus Racing’s Will Brown jumped to third.

Van Gisbergen tried to match the pace of Waters but could only manage fourth at the end as De Pasquale ending up as Waters’s nearest challenger.

Waters could count himself lucky he held onto provisional pole after scraping the turn five barrier on his final effort, knocking off the left-hand side mirror but causing no further damage to his Mustang.

Nobody else challenged Waters’s time, though, but De Pasquale’s team-mate Will Davison did jump up to fifth at the chequered flag, ahead of Brown and Heimgartner.

Feeney was eighth quickest, ahead of Hazelwood and Reynolds as just 0.435s covered the entire top 10.