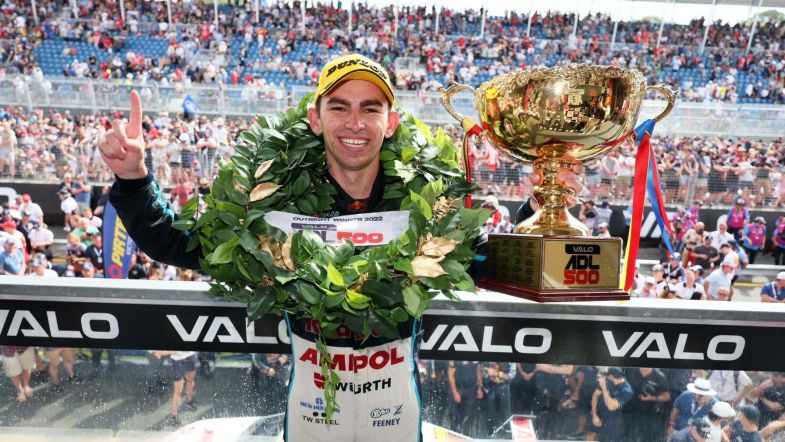 Red Bull Ampol Racing’s Broc Feeney says it was case of ‘all the pieces coming together’ before he claimed his maiden Supercars victory in the Adelaide season finale.

Feeney withstood fierce pressure from Walkinshaw Andretti United’s Chaz Mostert in the closing stages of race two, eventually coming out on top by less than at second at the finish.

Having taken a podium at the start of the year in Tasmania, Feeney had yet to put together a complete weekend while team-mate Shane Van Gisbergen romped to the title.

But the rookie believed that his breakthrough victory had always been on the cards.

“I knew it was coming, it was all a case of putting the pieces together,” said Feeney in the post-race press conference.

“I suppose it did [sink] in when I walked out onto the podium, I didn’t realise how much stuff happens when you win a race, getting pulled in every direction so it’s been pretty cool.

“It was a pretty special moment, walking out in front of all the fans with everyone cheering and a great send off for Holden.

“I wanted to get the first win all year and I left it pretty late but the car was awesome and everything sort of fell our way but we also had good speed today as well.”

Despite leading a Supercars race for the first time in his career, Feeney admitted that he had been calmer at the head of the field than he had been during the rest of the year where he was in the mid-field.

“It felt pretty good out there, I was probably calmer than I usually am in the pack,” said Feeney. “I could just focus on what I had to do, focus on the gap behind in that last stint, and try not to get ahead of myself.

“I told the guys on the radio to keep me nice and calm.”

Throughout the second half of the campaign, Feeney’s pace and consistency has been a big improvement and he was delighted to have shown his potential at last.

“The second half of the season has been a lot better than the first half, we’ve been a lot more competitive and probably more consistently in the top six or seven,” added Feeney.

“So, I felt like the pace has always been there and the early podium in Tasmania probably got everyone’s hopes up.

“Since Tailem Bend we’ve been in the mix, Gold Coast was a tough one and yesterday was my worst race because I ended up in the fence twice and made some mistakes.

“Without those mistakes, I knew we had a fast car, I did a good lap in the shootout and then all the stars aligned in the race.”