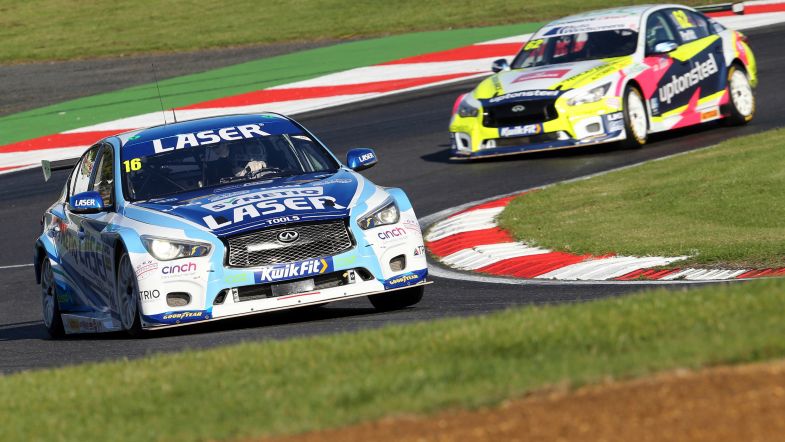 Laser Tools bows out ahead of 2023 campaign

The Laser Tools Racing name will disappear from the BTCC grid for the 2023 season after the automotive tool brand announced its withdrawal from the series.

Laser Tools had backed Aiden Moffat’s programme since his first full season in the series back in 2014, when the Scot joined the grid at the wheel of a Chevrolet Cruze.

Moffat would go on to secure multiple wins at the wheel of his Mercedes A Class and then an Infiniti Q50, with the expansion to two cars in 2020 seeing Ash Sutton join the line-up – going on to secure back-to-back championship titles.

Despite the Laser Tools decision, Moffat is set to continue on the grid in 2023, with the two TBLs that have been used to run the Infinitis in recent seasons being in his possession.

“Massive thanks for all the support over the years to Laser Tools,” Moffat said. “I cannot thank them enough for the fantastic journey together and I’m looking forward to sharing with you guys soon my plans for the 2023 BTCC season.”

Martin Smith, chairman of Laser Tools, said he was proud of the way the programme had performed through the years.

“We’ve had a great nine years in the BTCC and I am particularly proud of the 2021 season as winners of the Teams’ Championship and Drivers’ Championship in the same year,” he said.

“I would like to take this opportunity to thank everyone involved with the team during our years of competing in the BTCC — it really has been a “team” in the true sense of the word, and everyone involved over the years, in whatever capacity, has my heartfelt thanks. I would also like to thank other partners who have joined us in this success story.

“And of course we must thank Aiden Moffat and the rest of the Moffat family who have offered so much involvement and sheer hard work into this project. We wish them well for the future.

“Now, it’s time for a new challenge, and we have some exciting plans in place for 2023. However, we are open to new ideas and new offers to take the team forward.”