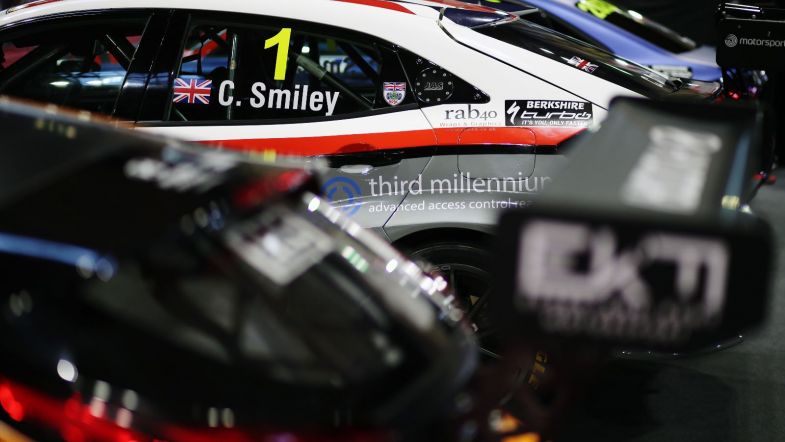 Chris Smiley says he hopes to be able to upgrade to the latest version of the Honda Civic Type R for his defence of the TCR UK title this season.

Smiley made the move to TCR last season after splitting with the EXCELR8 BTCC team, signing a late deal with the Restart Racing squad headed by father and son Bert and Ben Taylor – who had run the Northern Irishman during a three-year stint with BTC Racing.

An eleventh-hour deal saw Smiley back behind the wheel of a Honda Civic for 2022 and having taken the first win of the year at Oulton Park, he would remain in contention throughout his first campaign in TCR before wrapping up the title at Snetterton.

“This time last year, I expected to be doing the same again but then things changed,” he revealed in a chat with TouringCarTimes at the Autosport International Show. “Sometimes a change is for the better and sometimes it is for the worse, but for me, it was great to be able to start working with Bert and Ben again – even if everything came together really late.

“We only managed to pull the deal together at the last minute and we were lucky that JAS were able to send over an engineer to help with the car when we got to Oulton Park for round one as we’d not been able to do any testing before the season started and had no experience of running the car.

“When you’ve been racing in the BTCC, it’s almost expected that you will automatically be at the front of the grid and I think there was a bit of a target on my back because I was the guy from the BTCC who everyone wanted to beat.

“It turned out to be one of the most enjoyable seasons of racing I’ve had for a while as the TCR grid is very competitive, which you only really appreciate when you are out there racing on it rather than watching from afar.

“Winning the title and then being selected to compete in the FIA Motorsport Games to represent Team UK was fantastic, and capped a great season.”

Smiley admitted that moving over to TCR after five and half years in the BTCC had provided some new challenges – most notably dealing with the effects of TCR’s Balance of Performance over the course of the season.

“The core fundamentals are the same because at the end of the day, it’s a front-wheel drive touring car like the ones I’d been racing in the BTCC, but there are also some major differences – like the way the suspension works,” he said.

“The fact we were able to hit the ground running when the season kicked off was key and gave us a platform to build on, but there were challenges through the season as the Balance of Performance kicked in.

“Obviously I’ve had to deal with success ballast before in the BTCC but that was based on my own results, whereas with TCR operating a system that looks at results across the globe, it was outside our control and if a Honda was doing well and winning races in other series, the BOP impacted on us.”

With his place on the grid as part of an expanded Restart line-up already confirmed, the only question now is whether Smiley will continue to drive a car based on the FK7 version of the Civic or be able to upgrade to the new FL5 model announced by JAS Motorsport prior to Christmas.

“Obviously it is no secret that there is a new car available from Honda for this season,” he said. “Like a lot of other people, we’re hoping to get hold of one of those for the title defence, but there will only be a limited number available and we’ll have to see what happens.

“Either way, we know the competition is going to be tough with a number of new cars joining the grid but it’s great to return and carry the #1 – even if it means that target on my back is a bit bigger!”