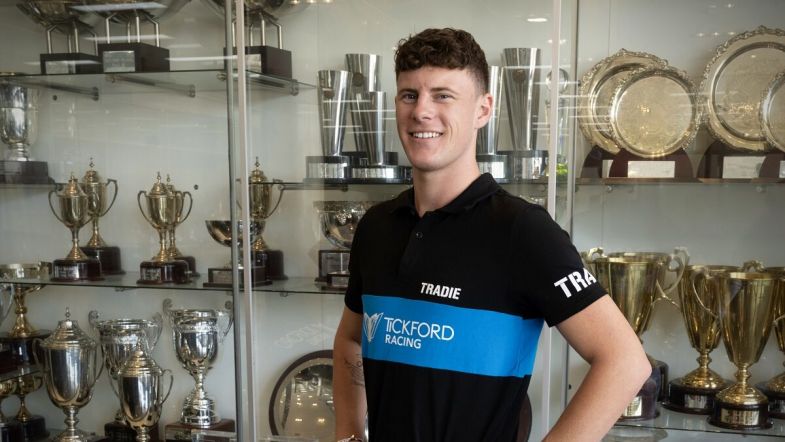 Reigning Dunlop Super2 Series champion Declan Fraser will make the step up to Supercars for the 2023 season after securing a deal with Tickford Racing.

Fraser – who made his series debut as a wildcard with Triple Eight at Bathurst – grabbed the 2022 Super2 crown on the back of an impressive campaign that featured four wins in eleven starts.

The 22-year-old will step into the car vacated by Jake Kostecki earlier this week, with his Ford Mustang running with backing from workwear and underwear brand, Tradie.

“It’s a pretty special feeling,” he said. “At the end of the Super2 season, we didn’t know where we were heading for 2023, so to get the call from Tim and everyone was pretty exciting.

“Getting from Super2 to the main game is a really tough step to make, especially from a financial perspective, so to have Tim and the team at Tickford Racing offer me this drive on performance is really special. It shows that Super2 is a great platform to prepare young drivers for the main game, and I’m really looking forward to the opportunity.

“It’s awesome to be representing Tradie as well, I’ve actually done four years of apprenticeship and have my tradesman’s certificate as an electrician. It’s a funny coincidence, but really cool to partner up with such a fun brand in Tradie, I can’t wait to get started.”

Fraser’s move to Super2 comes in the first year for the new Gen3 cars, and he admitted that made it the perfect time to embark on his rookie campaign.

“I’m excited to see how Tickford go about their main game team, and want to learn just as much as possible,” he said. “I think this year is the perfect time to jump into the main game with Gen3 coming along, it levels the playing field for everyone. We’re a four-car team, and Tickford has a lot of experience in developing cars.

“Of course Thomas (Randle) and I will have our rookie test days as well, so we’ll have a fair bit of track time and hopefully we can put all that together and have a really strong year.”

Team boss Tim Edwards said he was looking forward to seeing what Fraser could do on track during the year ahead.

“It’s funny how things work,” he said. “We went into Adelaide trying to beat Declan in Super2, and here we are a few weeks later preparing him to suit up with us in the main game for 2023.

“This sport works in strange ways sometimes, but Declan has all the qualities you look for in a young driver, so we are excited to work with him and are confident he will do a fine job for the team.

“We are very enthusiastic about having him on board and are looking forward to getting him behind the wheel of the Tradie Ford Mustang in a few short weeks.”