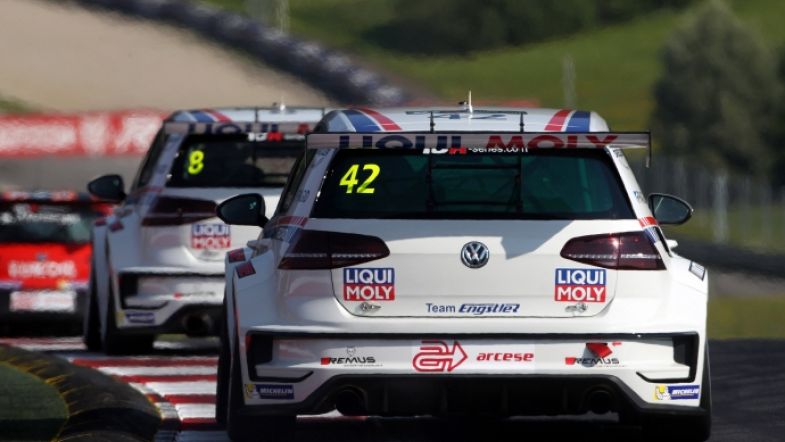 At the start pole sitter Rosell retained the lead, but his team-mate Mikhail Grachev, who was starting alongside him, lost second to Gené, with Oriola in fourth ahead of Target Competition’s Andrea Belicchi and Stefano Comini. Behind them was a close pack with WestCoast Racing’s Kevin Gleason ahead of Sergey Afanasyev and Gianni Morbidelli.

Shortly after Comini overtook team-mate Belicchi, just as Morbidelli passed Afanasyev and Gleason. As the race went on Oriola started putting pressure on Grachev, eventually pushing the Russian into making a mistake at Turn 5. The Volkswagen driver was subsequently attacked and overtaken by Comini as well.

Drama was to happen however, as Morbidelli attacked Grachev but spun at Turn 3, hitting arch rival Comini in the back in the process as his Honda Civic TCR was out of control, resulting in a retirement for the Italian and a considerable loss of time for the Swiss, who eventually slipped down to tenth.

Soon after that Belicchi slowed down with mechanical gremlins and was forced to retire, while Pepe Oriola made full use of a failed attempt from team-mate Jordi Gené to overtake the leading Volkswagen and went up to second. While Belicchi retired, Comini continued despite a puncture and spectacularly continued his race to the flag, despite only being able to use three wheels.

Despite his struggles with oversteer in the final stages of the race, Pol Rosell won ahead of Pepe Oriola, who now leads the championship, with Jordi Gené in third. Sergey Afanasyev came fourth for Craft-Bamboo Lukoil ahead of WestCoast Racing’s Kevin Gleason, with Grachev eventually settling for sixth in the other Volkswagen.

Oriola now leads the championship by two points over Stefano Comini, with Gené a further 22 points adrift. Gianni Morbidelli and Andrea Belicchi remain on 186 points, 39 shy of the lead.

Next up for the TCR International Series is Marina Bay, Singapore, on September, 20th, as the series enters its summer break.