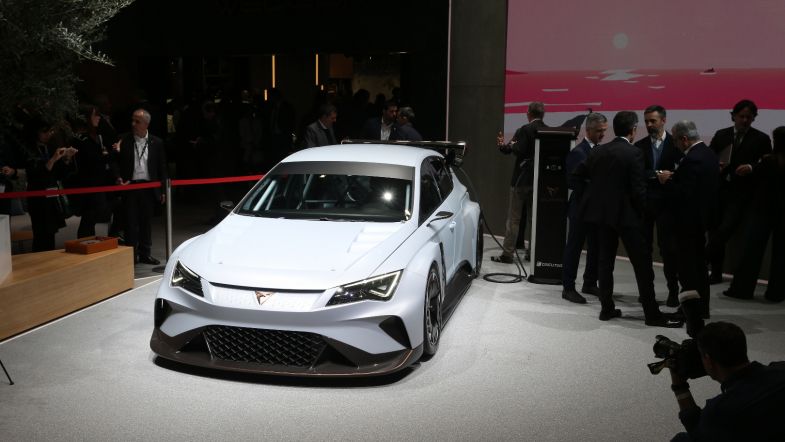 Further information was release by WSC Technology after the first appearance of the Cupra e-Racer on the opening day of the Geneva Motorshow.

The key points of the technical regulations will see the new series open to 4/5 door production touring cars featuring an electric motor capable of 300kW of continuous power and 500kW of max power @ 12000 rpm.

Battery capacity will be 65 kWh 800V, with all cars featuring a single gear and running with rear-wheel drive.

Teams will run an E TCR-branded power unit of motor, gearbox and inverters, together with the battery pack, that will be distributed by WSC Technology and then fitted to individual cars.

Promotional events are planned throughout 2018 before a new series is launched.

“First of all, we wish to thank SEAT for embracing the concept and building the Cupra e-Racer, which is the first car totally in compliance with the E TCR technical regulations,” WSC president Marcello Lotti said. “Why E TCR? Because our Group feels to have a sense of responsibility towards the whole touring car racing scene and so consequently could not ignore the trends of developing new technologies.

“We will be working on the same technical principles that made TCR so successful, with the aim of creating a platform for this new configuration.”

Jaime Puig, Cupra director and head of Cupra Racing was also excited about the possibilities for E TCR in the coming years.

“We are delighted to present the Cupra e-Racer at the Geneva Motor Show,” he said. “Developing an entirely new car, with a technology new to us, has been an exciting challenge. While we clearly sought externally the specialised competence we needed, we are proud of having achieved this project entirely at Cupra Racing and of playing a pioneering role in the E TCR concept, just as we did in the TCR process with the SEAT León TCR.

“The new E TCR is a real revolution, which not only will lead to a new breed of racing touring cars but will also challenge the motorsport community to rethink touring car racing completely.”