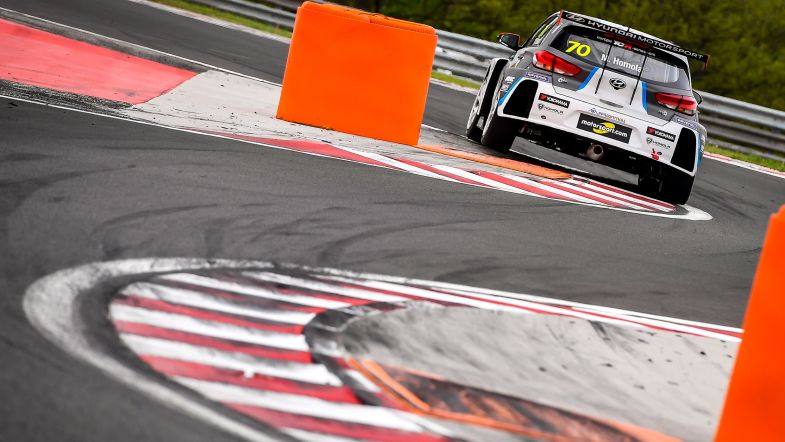 Mat’o Homola has secured pole position for the first race of the TCR Europe Touring Car Series in Hungary, after outpacing the rival Hyundais of Andreas Bäckman, Nelson Panciatici and Josh Files in the first qualifying session on Saturday afternoon.

The first segment of qualifying was red-flagged early on after M1RA Hyundai driver Luca Engstler crashed out at Turn 1 before anyone had set a lap, with the barriers requiring repair and Engstler’s car was out of qualifying – with the TCR Asia and Malaysia champion set to start both of tomorrow’s races from the back of the grid.

M Racing Hyundai driver Nelson Panciatici put in a flying lap of 1:53.064 early on, which would remain unbeaten in Q1, with Comtoyou’s Gille Magnus and the Peugeot 308TCR of Julien Briché his closest challengers in the first segment of qualifying.

Eight Hyundais of the ten entered progressed into Q2, along with Briche’s Peugeot, Magnus and Santiago Urrutia’s Audis, and the Vukovic Renault of John Filippi.

The only Hyundai not making the cut, after Engstler’s car, was Luca Filippi, with the Italian qualifying in 18th for his TCR Europe series debut.

In Q2, it was Target Competition’s Mat’o Homola who set the first benchmark with a time of 1:53.049 in the #70 Hyundai i30 N TCR, just under a tenth ahead of Panciatici’s Hyundai, and with just ten minutes in the session, there was only really time for one run from all teams.

Panciatici was just 0.099 seconds behind after his first run, but late improvements from the two Target Competition Hyundais of Andreas Bäckman and Josh Files saw them move up to second and fourth respectively, with Comtoyou Racing’s Gilles Magnus demoted to fifth.

Julien Briché was the best-placed of the Peugeots in sixth, ahead of Jessica Bäckman’s Target Hyundai.

Daniel Nagy was the top Hungarian at his home circuit in eighth in his M1RA Hyundai, ahead of Target Hyundai driver Dusan Borkovic and the WRT Audi of Santiago Urrutia, who secures the reversed grid pole position for Race 2.

Natan Bihel in the second of M Racing’s Hyundais just missed the top ten, as did Vukovic Motorsport’s John Filippi, who will start 12th.

Two drivers have been marked as under investigation post-qualifying. Viktor Davidovski, in his PSS Racing Team Honda Civic TCR, and Gianni Morbidelli in the WestCoast Racing Volkswagen Golf GTI TCR, who qualified in 16th – both drivers allegedly improving their times under yellow flags.