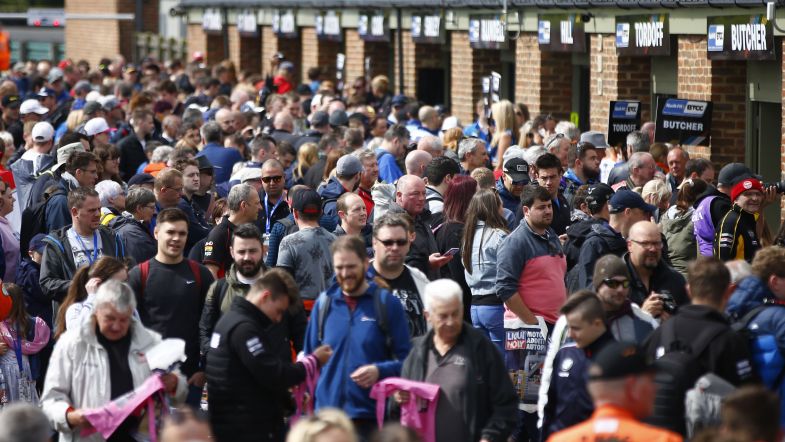 Bosses at Croft circuit have apologised to fans who were caught up in traffic queues that led to some people missing the opening BTCC race of the weekend.

Rain in North Yorkshire across the week leading up to the event was followed by further heavy showers on Saturday afternoon, which led to the cancellation of both the British F4 and Ginetta Junior championship races that followed the chaotic BTCC qualifying session.

With parking at the circuit only available in grassed areas, the additional wet weather on Saturday afternoon softened ground that has already been in use for a number of days and affected the speed at which staff were able to bring the public into the circuit; leading to a backlog of traffic onto the main access road.

With some fans missing race one as they attempted to navigate the queues, the British Automobile Racing Club – which owns and operates the circuit – issued a statement on Sunday evening to apologise for the problems that spectators had faced.

“On behalf of everyone involved with today’s event at Croft, we would like to thank you for your patience and apologise to those who had difficulties getting into the circuit this morning,” chief executive Ben Taylor said. “As you will appreciate, this week’s weather has caused challenges for many outdoor events across the country. Our advance planning through the week was very thorough and coped well with Saturday, but heavy overnight rain left the fields incredibly wet this morning.

“That simply means that cars cannot drive into the car parks as quickly as if it is dry and, even though the cars are still moving, the traffic inevitably builds back on the main roads. Particularly with a bumper crowd like we had today.

“We realise how frustrating it is to sit in traffic and to feel that it’s not going anywhere, but I can assure you that all the circuit staff and the additional agencies worked tirelessly to get everyone in as soon as possible.

“We got the final car in just before 2 o’clock but unfortunately some people missed the first Touring Car race and we are really sorry for that.

There are always lessons to be learned and we will sit down and cover those off in our event debrief. But in the meantime, we would like to thank you for visiting Croft and hope to see you again soon.”

Croft’s round of the BTCC will move to later in the year in 2020 after a revised calendar was released for next season.