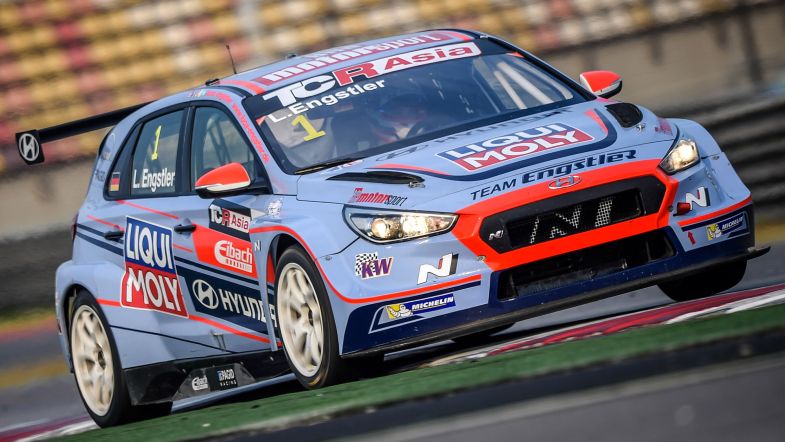 Luca Engstler has taken the victory in the first TCR China Touring Car Championship race of the weekend at Ningbo in his Engstler Motorsport Hyundai, holding back the trio of Hondas led by Dan Lloyd.

Engstler launched away well at the start but was quickly under attack, first from Martin Xie, whose Honda had started second, and then by Dan Lloyd who quickly made his was past Xie and was now attacking Engstler’s i30 N TCR.

On the second lap, André Couto had to perform a rear-guard action to keep the Audi of championship leader Huang Chu Gan at bay, before starting to pull a slightly safer distance in the following laps.

With the cars at the front starting to spread out, it was the fight for seventh that was the most interesting, with Kenneth Look having to defend hard in the sister NewFaster Audi from Edward Chen’s Volkswagen and Rodolvo Avila’s MG 6 TCR.

Engstler went on to win the race by four seconds ahead of Lloyd, despite the car only arriving at the circuit an hour before qualifying this morning.

As the cars started to cross the finish, a late lunge from Chuang Yan saw the ARTKA Volkswagen driver snatch ninth from Rodolfo Avila, with the MG driver crawling across the line with damaged suspension in tenth.