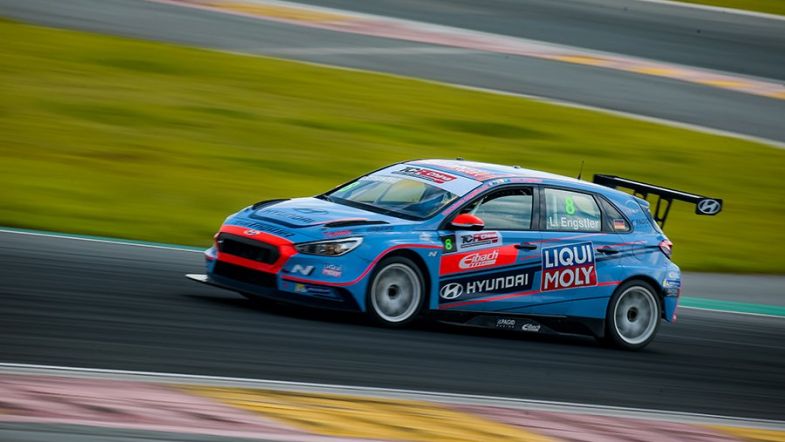 Hyundai driver Luca Engstler claimed his second victory of the weekend from eighth on the reversed grid, while it was a disastrous race for the Dongfeng Honda MacPro Racing team, with all three cars eliminated by lap three.

Edward Chen started from pole position in the TA Motorsport Volkswagen Golf GTI TCR, but quickly had the Hondas of André Couto and Dan Lloyd on his tail, with the MG 6 TCR of Rodolfo Avila running in fourth ahead of Engstler.

Behind at the start, it was trouble for Martin Xie in the #55 Honda, as he was shoved into the pit wall by Kenneth Look’s NewFaster Audi, who himself was taking avoiding action with his team-mate Huang Chu Han on his right-hand side. Xie’s car was out with terminal damage.

Up front, the remaining two Hondas passed Chen’s Volkswagen before the end of the lap, while Engstler quickly carved his way past Avila and then Chen to join the Honda pair at the end of lap two.

Engstler and Lloyd were then embroiled in a hard battle, with Engstler’s Hyundai drafting around the outside of Lloyd along the main straight, with Lloyd fighting hard to keep the position, running Engstler out wide at Turn 1.

Unfortunately, Couto had lost control of his Honda into the corner just ahead, and as Engstler switched to the inside, Lloyd had nowhere to go and crashed into his team-mate, with the last Hondas now out of the race, and Engstler given an easy path to victory.

Engstler went on to win the race by 15 seconds over NewFaster’s Huang Chu Han, who has now extended his lead in the championship, while Chen crossed the line third, but was then excluded for starting out of position.

This put the MG 6 TCR of Zhang Zhen Dong on the podium, with team-mate Rodolfo Avila behind him in fourth. Chuang Yan’s ARTKA Volkswagen was fifth, with the two Audis of Kenneth Look and James Wong the last classified cars in the race.

The final round of the championship takes place at Zhouzhou on October 26th-27th.