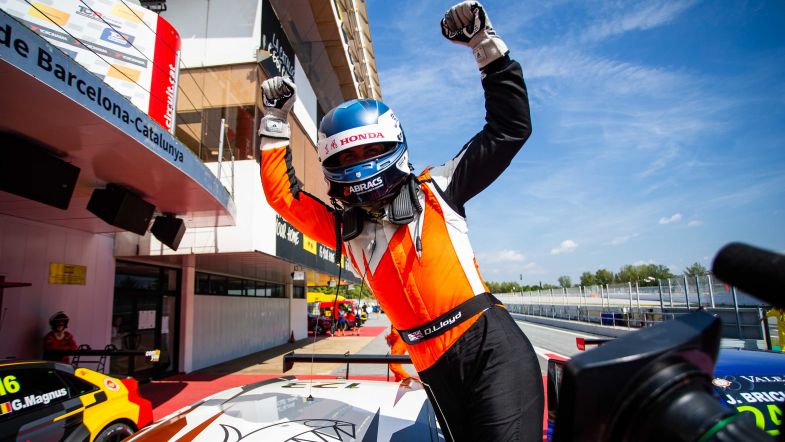 Brutal Fish Racing’s Dan Lloyd says he considers his victory in the second TCR Europe series race at Barcelona as his “first proper win”, having inherited his maiden triumph at the previous round.

Lloyd started from pole in the reversed grid race and withstood a fierce attack from the Comtoyou Racing Audi RS 3 LMS of Gilles Magnus to take his first on-the-road win of the season.

Having finished third on the road at Oschersleben, but inheriting the win thanks to post-race penalties, Lloyd was able to celebrate properly for the first time.

“It feels like my ‘proper’ first win, with what happened at Oschersleben,” Lloyd said.

“It’s quite emotional and I’m just thankful for all the guys at the Brutal Fish Racing Team for the opportunity, especially to Martin Ryba for everything. Really, really happy…”

Lloyd had to defend for almost the entire race from Magnus’ Audi, which was quicker in the first sector of the lap but trailed off the final sector.

Using the better traction out of the corners on his Honda Civic Type R FK8 TCR, Lloyd said his defence had to be on point in order to secure the win.

“A very, very tough race; we were so weak in our straight line speed and with the Audi in the slipstream I had the fastest car on the grid behind me.

“I knew I needed to push really hard to get the gap I needed on the straights, but at the same time we’re around 100 kilos heavier than them, so I thought we were going to die with tyres at the end.”