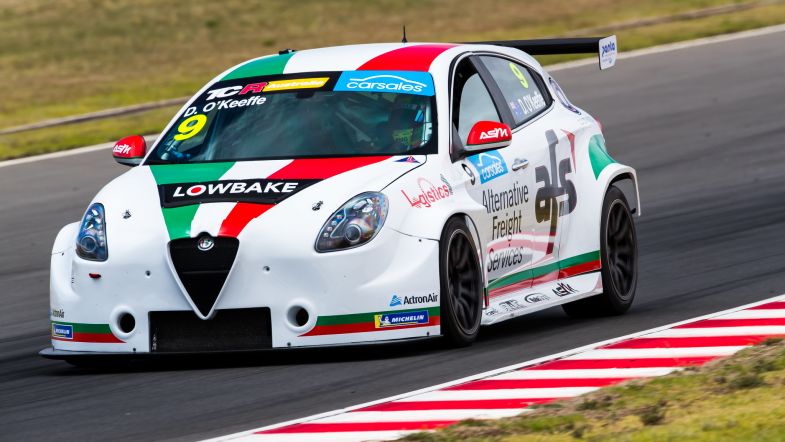 Dylan O’Keeffe edges Will Brown for pole at The Bend

Dylan O’Keeffe emerged on top of a huge battle with newly-crowned champion Will Brown to secure pole position for the final rounds of the TCR Australia series season at The Bend.

The Alfa Romeo driver would beat Brown’s Hyundai to top spot by less than a tenth of a second after a hard-fought session that saw a number of drivers hit trouble as they tried to find grip in the early morning conditions.

Although Iain McDougall led the way in his Melbourne Performance Centre-run Audi RS 3 LMS on the first flying laps of the 30 minute session, it was the second laps that saw the first serious lap times set.

Brown quickly moved to the head of the times at the wheel of his Hyundai i30 N TCR ahead of Jordan Cox’s Alfa Romeo before John Martin was the next driver to take a trip off in his Honda Civic Type R as drivers tried to find the limits on a cool circuit.

With a third of the session gone, Aaron Cameron became the first driver to dip below the 1:57s but his time would then be obliterated by Brown, who went quickest of all in the first and third sectors to slot onto provisional pole, with Cameron improving his time but setting a time two-tenths off provisional pole.

Chris Pither was also impressing in his Renault Megane to sit third, although he would then suffer a high-speed spin having just gone purple in the first sector, with O’Keeffe taking the opportunity to sneak ahead in his Alfa Romeo.

With the whole field then pitting for fresh tyres at the half way stage of the session, Tony D’Alberto made his move to the front of the pack, breaking the 1:56s mark in his Wall Racing-run Honda thanks to a storming final sector.

Brown responded immediately to go nearly three-tenths of a second quicker than the Honda, with Cameron and Nathan Morcom jumping up into third and fourth.

Behind however, O’Keeffe was on a quick lap in his Ashley Seward Motorsport-run Alfa Romeo and edged ahead of Brown by just 0.0816s to slot into provisional pole.

The champion did his best to try and respond but would then abort his final lap of the session after putting a wheel off track and returned to the pits, ending his bid to try and depose O’Keeffe from top spot.

D’Alberto and Cameron would push hard on their final laps but were unable to improve, allowing O’Keeffe to secure his second pole position of the season by the narrowest of margins.

That gave O’Keeffe two vital points in the battle for second in the standings behind Brown, who will share the front row with the Alfa Romeo racer.

D’Alberto and Cameron will share the second row of the grid, with Nathan Morcom in the second of the HMO Customer Racing Hyundais sharing row three with Andre Heimgartner’s Holden Astra; the Kelly Racing driver having pushed hard in the closing moments to try and launch himself into the fight for pole.

Pither was seventh despite his earlier spin, with Jordan Cox, Martin and McDougall rounding out the top ten.

Tim Brook, at the wheel of the debuting Garage1 Cupra TCR would qualify in 13th place, with the two returning Subaru WRC STI TCRs – now being run by Mildun Motorsport – down in 18th and 19th in the hands of Barton Mawer and Matthew Simmons.

James Moffat, who snared pole at The Bend earlier in the season in his Renault Megane would endure a session to forget, with driveshaft failure seeing him grind to a halt on the circuit and leaving him down in 20th place on the grid.

The Peugeot 308TCR of Aurélien Comte meanwhile was unable to take part in the session due to ongoing issues with the wiring loom that have required the DG Sport team to fly out replacement parts to the circuit.

As a result, Comte will also miss race one of the weekend later today, although the car is scheduled to appear in Sunday’s two races.