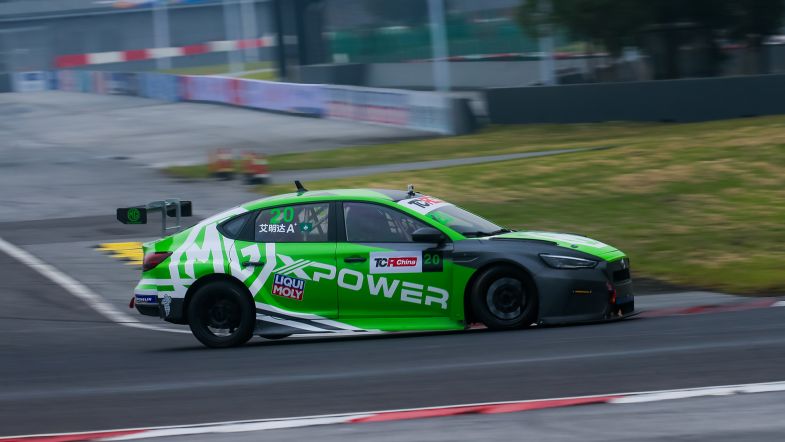 MG doubles up with wins for Rainy He and Rodolfo Avila

MG notched up two further victories in the first two TCR China championship races at the Jiangsu International Circuit, with Rainey He winning the first race and Rodolfo Avila the second.

MG XPOWER driver He started from pole and headed the first race from lights to flag.

There was further action behind him as Teamwork Lynk & Co Motorsport driver Ma Qing Hua fought his way up the order from fifth position on the grid.

The race was interrupted by one safety car session on lap nine as Autohome Racing Team driver Zhang Zi Yi beached his Lynk & Co 03 TCR in the gravel.

Ma was right on the rear bumper of Avila at the end of the race in the fight for second position, making the move stick on the penultimate lap.

He won the race by close to three seconds ahead of Ma, with Avila in third and Zhang Zhendong in fourth. Sun Chao rounded off the top five, making it four MGs in the top five.

The start of the second race saw MG driver He claiming the lead from pole, but it only lasted until Turn 2 when Avila managed to get past to claim the lead.

Lynk & Co driver Ma was once again on the move up through the field from sixth on the grid.

The second race was just like the first interrupted once due to a safety car session, this time as Volkswagen driver Yan Chuang went off.

The race resumed with 12 laps left and Ma lost one position down to fourth at the restart to MG driver Sun Chao.

Zhendong, placed second, was investigated by the stewards for an incorrect restart but with no decision taken.

Former WTCR driver Ma tried hard to get past Chao in the final laps and the two came together in the very last corner of the last lap.

Chao managed to stay ahead, securing an MG 1-2-3 with Avila winning the race ahead of Zhendong and Chao.

Ma only just managed to secure fourth, with He crossing the finishing line just 0.232 seconds behind in fifth.

Filipe Souza rounded off the top six for T.A Motorsport.